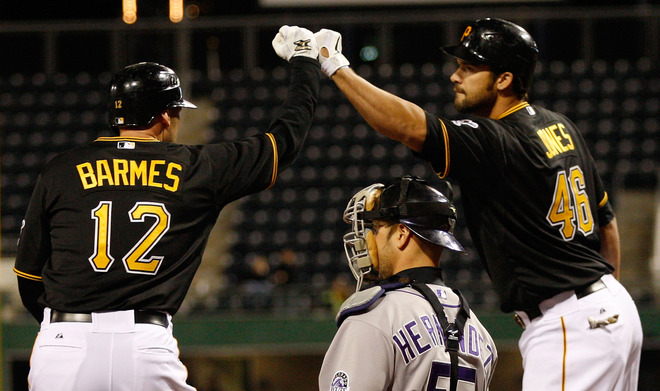 If the Pittsburgh Pirates are looking for a theme song to the 2012 season, I recommend “Same Old Song and Dance” by Aerosmith.  Three weeks into the season, win or lose, fans know what to expect out of their Buccos each night, solid pitching, good defense, and the occasional splash of offense.

Tonight against the Colorado Rockies, all was the same, except the offense came through in more than one situation, and it was by players who have been quiet most of the year.  Colorado jumped out to a 2-0 lead with a two run homer by Carlos Gonzalez off of Kevin Correia.  Correia settled in after this inning as he would last a total of six innings, giving up two runs on four hits while striking out four batters.

The Pirates offense would score one run off of Rockiesstarter, the ageless Jamie Moyer.  Moyer would also go six innings allowing one run on six hits while striking out and walking three batters.  That lone run came in the first off of a ground out by Andrew McCutchen that scored Alex Presley.

The scoring really picked up for these two teams when the bullpens came into play.  The Buccos would take the lead in the seventh.  Cutch would hit a two RBI double, which scored Presley and Jose Tabata, off of reliever Rex Brothers.  This lead did not last long.  Colorado answered with two runs of their own in the eighth.  Gonzalez would hit his second two run home run of the night, this time off of Tony Watson.  Watson however did pick up his first win of the season, and the Buccos battled back for two more runs in the bottom part of the inning.

Clint Barmes hopefully had a coming out party tonight as he would go 3-3 on the night with two doubles.  His third hit tied the game when he took Matt Belisle deep for his second home run of the season.  With two outs and a runner on third and first, Casey McGhee would hit a ball to shallow right field to score the go ahead run.  This would allow Joel Hanrahan to earn save number three on the season with a 1-2-3 ninth inning, giving the Pirates a 5-4 win

Eleven hits and five runs from the Pirates tonight, as every starter other than Neil Walker had a hit tonight.  Was tonight the night the offense finally flipped the switch? Only time will tell.  Tomorrow the Pirates and Rockies will play a doubleheader, with game one beginning at 12:35.  Game one will feature James McDonald taking on Juan Nicasio.