Pirates Use Bats To Defeat Reds 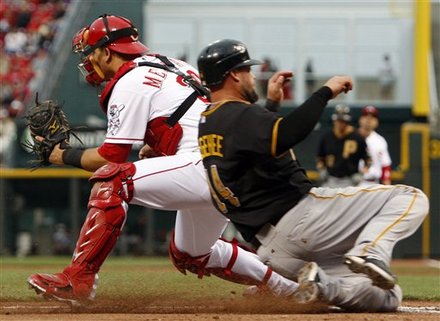 It is only June and we did go down this road last season, but when you have 19 straight losing seasons, tonight was another step forward for this young Pittsburgh Pirates team.  The Cincinnati Reds are the only team the Buccos are looking at in the current N.L Central standings and being three games back before starting a three games series, means every game is important.

Now prior to tonight’s game it was rare that offense carried the team to victory, but for the second straight game that occurred.  This team got three home runs from guys that don’t show up in that part of the stat column.  Neil Walker hit a two run shot in the third, Casey McGehee hit his first of the year on a solo homer in the fifth, and Alex Presley, who was just recalled from AAA today, hit his third of the year in the sixth.

Clint Barmes may not have gone deep tonight, but he would go 3-4, while driving in three runs.  Apparently those few days off to work on his swing worked, because this is the second game in a row he has played well.  Hope it does the same for Pedro Alvarez.  The only Pirates starter without a hit was Rod Barajas, but he did walk and score a run.

The defense was once again solid, which was big, because the pitching was a little off tonight for a winning team.  A.J. Burnett got down early by giving up two runs in the first, but was able to work his way out of jams during innings two through five.  He would only last five innings, giving up three runs on five hits, while walking four and striking out eight.

The bullpen which has been a strong point all year was just as shakey.  Chris Resop went two innings walking two and striking out four.  This was followed up by Tony Watson walking a batter in the eighth.  The worst part of the night was watching Juan Cruz give up a run on three hits in the ninth without earning an out.  For all that Joel Hanrahan looked his best tonight in collecting his 15th save of the year.  He would strike out all three batters he faced as the Pirates went on to win 8-4.

Never a dull moment when the Buccos raise the jollyroger and I imagine the rest of this series will be the same.  Brad Lincoln will earn the start tomorrow with Charlie Morton on the DL.  Johnny Cueto will be his opponent on the mound, which will be no easy task, since Cueto seems to be at his best when faceingPittsburgh.  First pitch is scheduled for 7:10