Pirates Use Four Homeruns To Take Series From Brewers 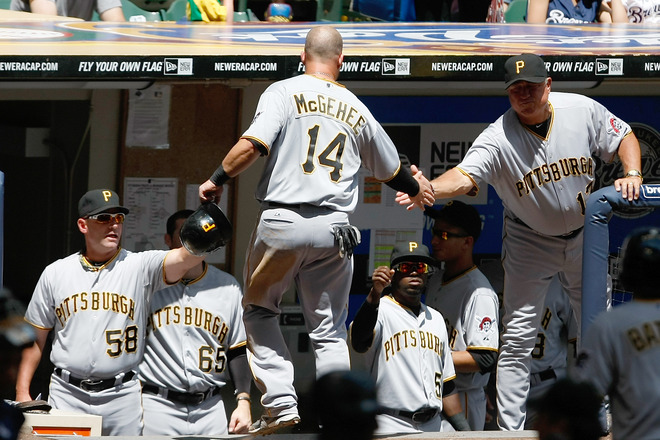 The Pittsburgh Pirates keep finding ways to win games.  With their entertaining 6-5 victory today, the Bucs won their first series against the Milwaukee Brewers at Miller Park since April 2010.  They have now won three straight series, going 7-2 against the Brewers, Cincinnati Reds, and Chicago Cubs.  They are now 27-26, one game over .500, and, in case you missed it the first time…THEY WON A SERIES OVER THE BREWERS AT MILLER PARK.

As has been the case all season, James McDonald was solid today for the Bucs, giving up just one earned run on four hits through his six innings of work.  After allowing two runs in the first inning, J-Mac settled down and held the Brewers in check for the bulk of his start.  Even though he wasn’t as dominant as he’d been in recent starts, he still outpitched his mound opponent, and earned the victory, improving to 5-2 while lowering his ERA to 2.14 for the season.

Juan Cruz and Joel Hanrahan each gave up a solo homerun in their respective innings of work, while Jason Grilli pitched a scoreless frame.  All in all, the bullpen held off the power-hitting Brew-Crew to secure the Pirates’ 6-5 victory.  Cruz and Grilli have ERA’s sitting at 1.74 and 1.71 respectively, while Hanrahan picked up his 14th save of the season.

Similar to last Sunday, the Bucs’ offense was the story of the game today, using the long ball to actually out-hit the opposition.  Andrew McCutchen, Garrett Jones, Rod Barajas, and Clint Barmes all hit homeruns, including back-to-back round-trippers by Cutch and Jones in the fifth inning.  Neil Walker led the way with three hits today, including a double and two singles, while every starter, with the exception of Jose Tabata and Matt Hague, found their way into the hit column.  A ninth inning solo homerun by Barmes, which didn’t appear to be significant at the time, turned out to be the game-winner.

The Bucs won today, securing their third consecutive series victory.  By tallying 11 hits today, they maintained a perfect record (11-0) when they get 10 or more hits.  They are now only three games back in the N.L. Central behind the division-leading Reds.  And for once this season, they’re playing with confidence, both on the mound AND at the plate.  Aside from Tabata and Pedro Alvarez, who sat out today’s game, the rest of the everyday starters have reason to be optimistic about the way they’re swinging the bat.  If Tabata and Alvarez can get on track, this could be a dangerous offense.

But like I said last week, let’s not get ahead of ourselves here.  Sure, the Bucs won the series this weekend, but the Brewers were without Ryan Braun the last two games (aside a pinch-hit appearance today), as well as Aramis Ramirez.  The Pirates can only beat who they play, and they beat the Brewers, two out of three games.  Yes, it’s a great day to be a Pittsburgh Pirates fan.

After a day off tomorrow, the Pirates will face off against the first-place Reds at Great American Ballpark.  It’ll be another huge divisional series before the Bucs embark on a long stretch of Interleague Play.