Pirates Use Longball And Pitching To Defeat Braves 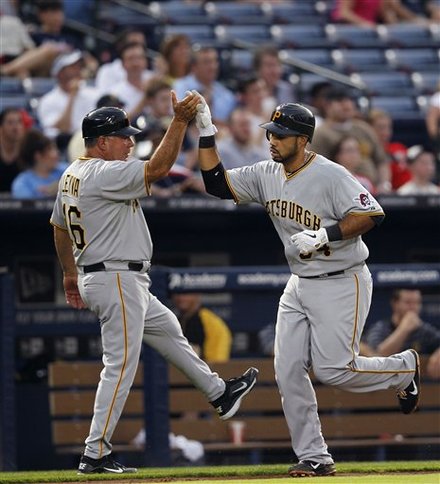 It is the final day of April and finally the Pittsburgh Pirates offense has shown signs of life.  Nine runs on eleven hits were plenty enough to take down the Atlanta Braves and their three runs on eight hits.  All eight of the Buccos starters had at least one hit, while seven came around to score at least one run.

So far this year, when the Pittsburgh offense made an appearance, it was a brief one.  Tonight however, the Pirates put a crooked number on the scoreboard a total of four times.  The other key factor in tonight’s victory was the long ball.  Pedro Alvarez hit a two run home run in the fourth inning that scored Yamaico Navarro.  Navarro then hit his first homer of the year in the sixth that scored Neil Walker.

The scoring began for Pittsburgh in the third on a Josh Harrison single, which was followed up by an Andrew McCutchen sac fly.  They would then put up three more runs in the seventh.  The first came on a passed ball by from Braves catcher Brian McCann.  A Walker single would bring in the second run, and that was followed by Navarro grounding into a force out to Chipper Jones, bringing in the final run of the inning.

The other great thing for fans to see tonight was the return of the great pitching.  The past two games have seen Pittsburgh pitching going only 5 and 4.1 innings.  James McDonald would last 7.2 innings tonight allowing three runs on seven hits, while walking two and striking out ten.  McDonald had trouble in the first when he gave up a two run homer to Freddie Freeman.  He calmed down after that, got help from the defense, and collected win number one of the season.  James stated after his last start, that A.J. Burnett has been a great mentor so far this season and the results seem to be showing.

Splitting a four game series with the Braves on the road is a big step forward for the Buccos.  They end what was considered the toughest April schedule in the majors with a 10-12 record and are right in the hunt for the division after a month.  Things will not get any easier for them as they prepare for three on the road against the St. Louis Cardinals.  Charlie Morton will start for the Pirates with first pitch scheduled for 8:15.