Pirates Are Walk-Off Winners In Wild Game At PNC Park 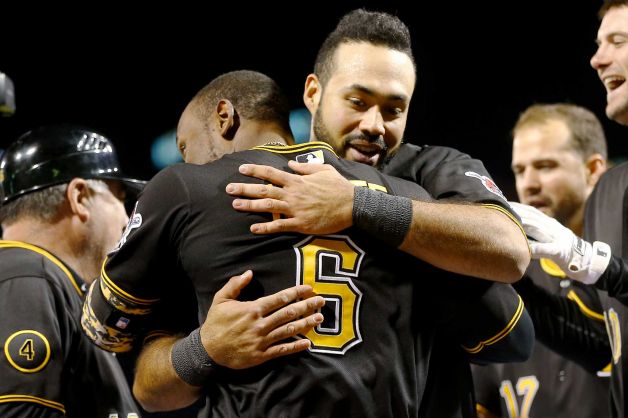 After what has been an agonizing couple weeks, the Pittsburgh Pirates were in desperate need of a win tonight in front of their home fans as they opened up a three game series against the Toronto Blue Jays at PNC Park.  The Pirates scored three runs in the ninth inning, capping off a back and forth game to earn a much needed victory in walk-off fashion.

Offense certainly wasn’t a premium tonight, as the two teams combined to score 11 runs on 27 hits.  Neither starter, Gerrit Cole for Pittsburgh or Brandon Morrow for Toronto, had their best stuff tonight, and they paid for it in the run and hit columns.  Morrow gave up three runs on 11 hits in five innings, while Cole gave up four runs on seven hits through five.  Each team used four pitchers, including Casey Sadler, who made his Pirates debut, giving up just one hit in two innings of work.

The Blue Jays took the lead early on Cole and the Bucs on back to back doubles by Jose Bautista and Edwin Encarmacion.  Pittsburgh tied things up in the second inning, though they could have done much more damage.  The Bucs had the bases loaded with no outs, but all they could muster was a single run on a ground out double play by Jordy Mercer.

The Bucs took the lead on Andrew McCutchen’s RBI single in the third inning.  A two run homerun by Colby Rasmus put Toronto back on top in the fourth inning, and they added another run in the fifth on an RBI double by Bautista.

Pittsburgh responded on McCutchen’s second RBI single in the fifth inning to cut lead in half, but Steve Tolleson hit a pinch hit RBI triple to put the Jays back in front, 5-3.  The score remained the same until the bottom of the ninth inning, which would be the most exciting of all.

Wow, what a game!  The Pirates offense woke up for six runs on 17 hits, including five players with multiple knocks.  Marte led the team with four hits, while Cutch and Walker had three, Pedro had a pair, as did Tony Sanchez.  While we all knew the offense had this kind of potential, it was beginning to learn very bleak for the Pirates and their fans.  This was a huge victory for Pittsburgh, one that hopefully can propel them through this weekend and into next week.

The Pirates and Blue Jays will return to action tomorrow evening for the second game of the series at PNC Park.  Francisco Liriano will look to earn his first victory of the season.  First pitch is scheduled for 7:05pm.