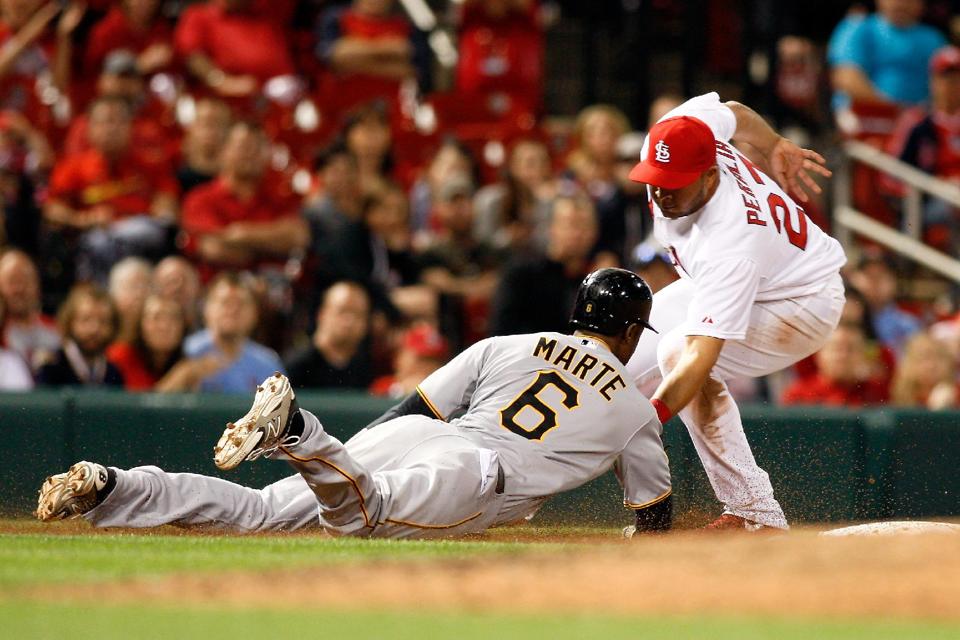 Where is the Pittsburgh Pirates offense?  It seems to have been missing all season and tonight that disappearance cost them game one of a three game series against the St. Louis Cardinals.  The pitching match actually looked to favor Pittsburgh, as Gerrit Cole performs well against St. Louis, while Shelby Miller struggles the most when facing the Pirates.

Cole’s final line was not dominating by any means, but over the course of seven innings he gave up one run.  Anytime your pitcher goes out there and gives up one run you better get him a win.  That did not happen tonight.  The Cardinals scored that lone run in the first inning on a double by Matt Holiday that scored Matt Carpenter.  Cole finished his night allowing six hits and three walks, while striking out four.

Miller was not able to last as long, since he threw 97 pitches in 5.2 innings of work, but he was able to get out of every jam that he faced.  The biggest threat came in the third when he allowed two singles and a walk to load the bases.  Up to the plate stepped 2013 N.L. MVP Andrew McCutchen, who would hit a sharp ground ball to the short stop for the inning ending double play.

As frustrating as that was, the top of the eighth was making Bucco fans pull out their hair.  Starling Marte would pinch hit for Cole and reach first the only way he knows how, by being hit by the pitch.  He would reach third on a Jose Tabata single.  Marte would then get caught in a run down between third and home on a fielder’s choice hit back to the pitcher by Neil Walker.  A wild pitch would send Tabata and Walker up 90 feet.  With first base open St. Louis elected to walk McCutchen and take their chances with Pedro Alvarez.  Alvarez would go down looking for our number two.  Backup catcher Chris Stewart, who replaced what appears to be an injured Russell Martin, would swing and miss to end the inning.

You read it right folks, the Pirates had four guys reach base in one inning with the heart of the order up and not one of them crossed home plate.

Tonight was very painful to watch for a number of reasons.  The main ones for me were that your team ace goes out and gives you every opportunity to win and you do not.  The other is that there were scoring opportunities with the main part of your lineup up to bat and you can not come through.  If this doesn’t change soon, things could get ugly in a hurry.