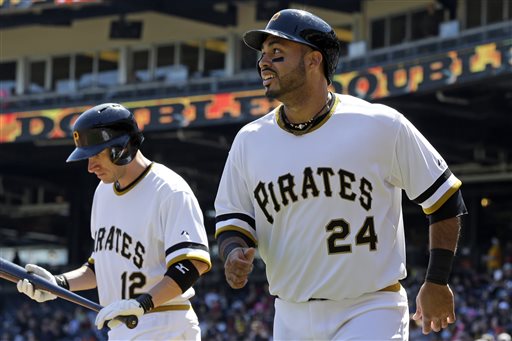 Entering their second home stand of the season, the Pittsburgh Pirates and their fans knew they’d be tested.  After all, they would be facing three of the more respected teams in all of the National League.  But, after sweeping the Cincinnati Reds last weekend and splitting a rain-shortened series against the St. Louis Cardinals, the Bucs welcomed the red-hot Atlanta Braves to town for a four game series this weekend.

Check out our thoughts and predictions for this afternoon’s game in our Pregame Show:

The Pirates’ impressive and perhaps improbable home stand continued this weekend, as they clinched a three out of four series victory with a 4-2 win this afternoon at PNC Park.

Just like last Sunday in their comeback victory over the Reds, the Pirates had to come from behind against the Braves this afternoon.  After falling behind 2-0 in the second inning, the Bucs responded in the bottom of the inning.  Russell Martin doubled home Pedro Alvarez, and then scored on Clint Barmes’ RBI single, tying the game early.  Barmes gave the Pirates a one-run lead with an RBI single in the sixth inning, scoring Neil Walker.  They added another run in the bottom of the seventh, when Travis Snider crossed home on a wild pitch.

The Pirates used the bulk of their bullpen this afternoon in the victory.  Jonathan Sanchez got the start today, hoping to improve upon the first pair of starts, in which his ERA ballooned to over 12.00.  Sanchez did lower his ERA under 12.00, but he once again struggled with his control against the Braves’ lineup.

Sanchez lasted just three innings, giving up two runs on four hits with three walks.  Jeanmar Gomez, Justin Wilson, and Jared Hughes combined to toss four innings of shutout baseball, and after Tony Watson shut the Braves down in the eighth, Jason Grilli earned his seventh save of the season.

The Pirates’ offense continued to deliver this afternoon, tallying ten hits, many of which coming from unlikely sources.  Barmes had two hits and two RBI’s, while Martin also delivered a pair of hits.  Snider added two hits as well, while Starling Marte, Andrew McCutchen, Walker, and Alvarez each had a hit.  McCutchen missed homeruns in his third and fourth at-bats by a matter of feet.

This was a huge series victory for the Pirates, to defeat a Braves team that had lost only two games all season coming into this weekend.  But, while the victory today was satisfying, it was still troubling to see Sanchez struggle on the mound.  Quality starts are the key to winning baseball games in the long term, and that is something that continues to plague the bottom part of this team’s starting pitching rotation.

Check out our reactions to today’s game in our Postgame Show:

The Pirates, sitting at 10-8 on the season, have won 9-3 in their last twelve games.  They begin a difficult road trip tomorrow night against the Philadelphia Phillies.  First pitch is scheduled for 7:05pm.