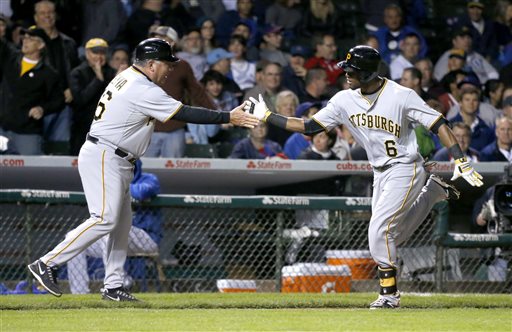 What a game!  Following a horrible game yesterday, the Pittsburgh Pirates responded tonight at Wrigley Field with a 2-1 victory over the Chicago Cubs.

Neil Walker continued his power streak at the plate with a solo homerun in the first inning to put the Bucs on top early.

Walker’s homerun was more than enough for Charlie Morton, who was phenomenal once again tonight.  He gave up just three hits and one walk with five strikeouts through seven innings, lowering his ERA to just 3.14 for the season.  Jeff Samardzija was impressive for Chicago, settling in after a difficult first inning to pitch very well.  He did struggle with his control at times, issuing four walks, but did strike out seven batters.  He lasted six innings before giving way to the bullpen for the seventh.

The Cubs tied the game in the bottom of the eighth off Mark Melancon.  Brian Bogusevic led off the inning with a single, advanced to second on Darwin Barney’s groundout, and moved to third on a wild pitch.  Donnie Murphy’s ground ball scooted past Pedro Alvarez, scoring Bogusevic and drawing the game even.  Luis Valbuena nearly hammered a two-run homerun, but the ball went just foul.  On the very next pitch, Melancon struck out Valbuena to end the inning.

Starling Marte broke the tie in the top of the ninth by crushing a hanging breaking ball into the left field seats.  Tony Watson and Jason Grilli combined to close things out in the bottom of the ninth to secure the victory.  Grilli needed some dramatics, though.

This was a huge win for the Pirates with a crazy finish.  They needed to pull this one out, and while it could’ve been a lot easier, they did whatever they had to in order to come out on top.  The Bucs won their 90th game tonight, and are closing in on their first playoff appearance since, you guessed it, 1992.

The Bucs and Cubs will match back up tomorrow night for an 8:05pm first pitch.