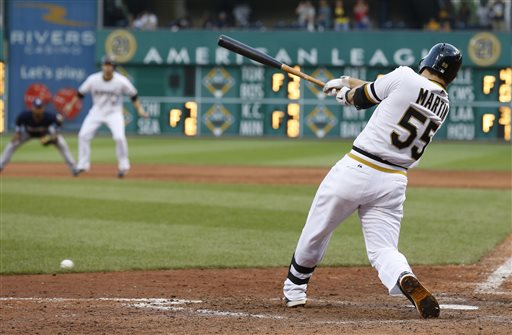 This has been an incredible season thus far for the Pittsburgh Pirates and their fans.  As the days, weeks, and months have gone on this year, the Bucs have transitioned from an up-and-coming team to a contender to the best team in all of baseball.  After a 2-1 walk off victory in the 14th inning over the Milwaukee Brewers this afternoon at PNC Park, the Pirates have won nine games in a row and sit with a Major League best 51-30 record.

During this wildly entertaining first three months of the season, the Pirates have won games in a variety of ways.  Today, they endured a game full of missed opportunities, impressive pitching by the opposition, and nearly a two and half hour rain delay.

The Pirates and Brewers combined to use a total of 14 pitchers throughout the marathon game at PNC Park.  Charlie Morton and Kyle Lohse started respectively for the Bucs and Brew-Crew, but they only lasted into the second inning before the skies opened up and the rain fell hard for hours.  After an extensive delay, play resumed at 4:25pm.

Tony Watson earned his second victory of the season (2-1), pitching three perfect innings.  Vin Mazzaro pitched five innings of no hit baseball following the rain delay, holding the Brewers in check.  Other relievers included Justin Wilson, Bryan Morris, Jason Grilli, and Mark Melancon, all of which didn’t let the Brewers build on their early lead.  The bullpen, as a whole, combined to pitch twelve innings, giving up only two hits and zero walks.

Milwaukee scored in the second inning on Logan Schafer’s sacrifice ground out, scoring Yuniesky Betancourt.  The Brewers held that lead until the bottom of the eighth inning, until Andrew McCutchen singled to left field, scoring Starling Marte.  Cutch was thrown out trying to advance to second, but the damage was already done.  The Bucs had tied the score, heading into the ninth inning.

The next five innings featured the Pirates’ relievers setting the Brewers down in order, while the Bucs’ offense put themselves into position to win, but weren’t able to get the go ahead hit to clinch a victory.  Pedro Alvarez had a golden opportunity in the 13th inning, walking to the plate with the bases loaded and only one out.  Unfortunately, he grounded into an inning-ending double play, much to the disgust of the PNC Park crowd.

Finally, in the bottom of the 14th inning, Russell Martin came to the plate in a pinch-hit appearance with Gaby Sanchez on second base and Jordy Mercer on first.  Martin’s seeing-eye single up the middle allowed just enough time for Sanchez to cross the plate, giving the Bucs the 2-1 victory.

This was another huge win for the Bucs.  They have now won nine straight games, sit at a pretty 51-30, and have a two game lead over the St. Louis Cardinals in the N.L. Central decision.  After a day off tomorrow, the Pirates will welcome the Philadelphia Phillies to PNC Park for a three game series beginning on Tuesday.