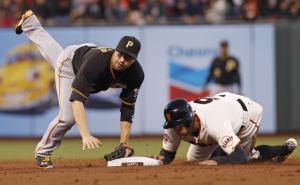 One day after losing 2-1, the Pittsburgh Pirates offense woke up tonight in a 10-5 win over the San Francisco Giants.  Some early home runs and a huge fifth inning led the way for the Buccos, but there were some interesting pitching substitions that may lead to some future moves.

Andrew McCutchen struck early to put Pittsburgh up 1-0 with a single to left field.  That first inninng could have been bigger after the first three batters reached on singles.  Fortunately the long ball came into play in the second as Garrett Jones and Jordy Mercer would each connect with solo home runs.

San Francisco would battle back with a run in the third and two in the fourth off of starter Jeff Locke.  Locke would only last four innings.  He stuff wasn’t the greatest as he allowed three runs on five hits, while walking four and striking out three.  However, he was lifted with a seven run lead for Jeanmar Gomez.  Was manager Clint Hurdle worried that Locke could not hold the lead?  Could it be that the Pirates are watching Locke’s inning count?  Or do they want Gomez to increase his workload with the potential for a start coming up?

Gomez would pitch the fifth, six, and seventh to earn the win.  He allowed one walk and earned a K, but most importantly shut down the San Francisco offense.  Jared Hughes would not be so lucky in his .2 innings of work.  He allowed two runs on three hits while walking a batter.  Tony Watson finished the eighth and then finished off the game with a 1-2-3 ninth.

I never have a complaint when the Buccos put up a ten spot.  It will be interesting to see what impact the decision to lift Locke so early will be, hopefully it turns out to be a positive for the team.  This win also allows Pittsburgh to maintain their one game lead over the Cardinals in the Central Division.  Game two of this four game series will take place tomorrow night at 10:15pm.