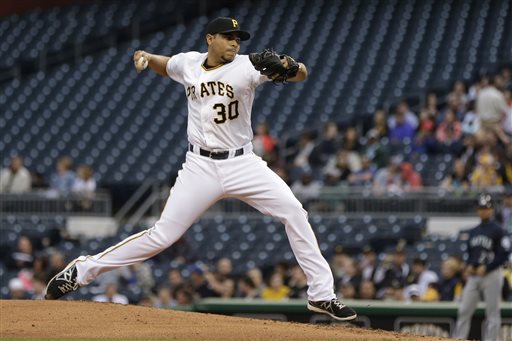 The Pittsburgh Pirates had to adapt early tonight, even before the first pitch was even thrown.  Prior to the start of the game James McDonald was placed on the 15-day DL and was replaced on the mound tonight by Jeanmar Gomez.  Michael McKenry was also given a chance to start tonight, when Russell Martin was scratched from the lineup with a stiff neck.  Even with these changes, the Buccos still performed against the Seattle Mariners.

Pittsburgh jumped on Seattle early by scoring two runs in the first inning.  With Starling Marte again leading the game off with a hit, Travis Snider drove him home with a double to center field.  Andrew McCutchen was up next and he traded places with Snider.  After that, Mariners starter Aaron Harang settled in.  He would go six innings allowing two runs on five hits, while striking out six.

While his night was good, Gomez was even better for the Pirates.  He would pitch five innings of shutout baseball, allowing two hits, striking out five and walking two.  The M’s only run of the night came off of Tony Watson in the seventh, when Raul Ibanez doubled in a run.

The Buccos added a few insurance runs in the eight off a two run homer by Garrett Jones.  This would give closer Jason Grilli some breathing room in the ninth, as he picked up his 13th save of the year, retiring the Seattle bats in order and cap off a 4-1 win for Pittsburgh.

Good to see the Pirates pick up the win tonight as this is only a two game series and they will be facing Cy Young winner Felix Hernandez tomorrow afternoon.  The Buccos have their ace, A.J. Burnett on the mound, so this has the makings of a low scoring game.  First pitch is at 12:35pm.