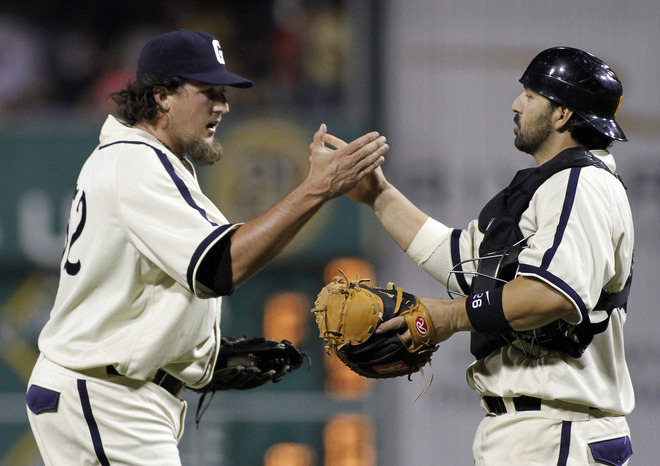 They may not all be pretty, but a win is a win, and we’ll take it.  The game tonight between the Pittsburgh Pirates and Kansas City Royals looked more like a Little League game than that between two professional franchises.  Each team had an error, the Buccos had a couple moments of sloppy defense, neither starter made it past the fourth, and the Royals defense in the fourth inning was shotty enough to allowPittsburgh five runs.  Thankfully the Pirates bullpen closed the door over five innings of work to cap a 5-3 victory.

Chris Resop would pitch an inning and not allow a run while giving up three hits.  Doug Slaten collected his second hold of the year in 2/3 of an inning of work.  Jared Hughes earned his second win of the year, allowing one hit and striking out two batters in 2 1/3 innings of work.  That set the stage for “The Hammer” Joel Hanrahan to earn his 17th save of the season by setting the three batters he faced.

All the bullpen work was needed because of a poor showing by James McDonald.  He would only last four innings allowing three runs on five hits, while walking and striking out two batters.  Kansas City starter Vin Mazzaro lasted only three innings giving up three earned runs on three hits while striking out and walking four batters.

The final game of this home stand is set for 1:35 tomorrow afternoon.  A.J. Burnett will take the hill forPittsburgh.  It should be an interesting game for Burnett as he will most likely not have is normal catcher, Barajas, behind the plate and the coaching staff would like to see him eat some innings with all the work from the bullpen tonight.