Pirates Win It With Tony Sanchez Single In The 16th 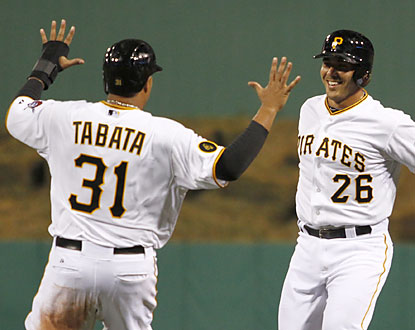 One of the questions coming into the 2014 for the Pittsburgh Pirates was could the pitching staff maintain the high level of performance that helped lead the way for the breakout season that was 2013.  Charlie Morton had a very good season last year and was looking to put together a full year this season with a new contract in hand.

Start one for Morton went well for him as he would last six innings, striking out six batters, while walking one and giving up four hits.  Ground Chuck has shown the potential to be a near the top of the rotation pitcher when healthly.  Hopefully this is the start of a great year for him.

The Pittsburgh offense was kept in check again tonight.  The Pirates jumped out to a 2-0 lead through the first seven innings.  Jordy Mercer singled home Neil Walker with a single to shallow left field in the second inning.  Run two would come in the sixth when Starlin Castro fielding error allowed Starling Marte to score on a Russell Martin hit.

The Chicago Cubs were able to collect hits throughout the game, but it wouldn’t be until the eighth inning before they collected their first run of the game, which came on an overturned double play call.  Originally ruled out, a replay showed that Walker’s throw pulled Mercer off the bag before he was able to tag second base.  This call came back to haunt the Buccos in the ninth when Luis Valbuena was able to single to right field off of Jason Grilli to tie the game at two.

An Anthony Rizzo solo home run in the 12th gave the Cubs 3-2.  The Pirates answered in the bottom part of the inning on a Marte single to shallow left field that tied the game at three.  After the 12th it was a pitching duel.  That would change in the bottom half of the 16th, when Tony Sanchez would step to the plate with one out and runners on the corner.  Sanchez poked a single between third and short to give the Buccos a 4-3 win.

Chicago was led by lead off man Emilio Bonifacio and his 5-7 night.  The Pirates were outhit 15-8, but led in the run column.  Offense is something that the Buccos need to find quickly as the bullpen as been taxed early with back to back extra inning games to start the season.

This series will wrap up tomorrow afternoon at 12:35pm when Wandy Rodriguez will start for the first time since being injured in 2013.  Chicago will counter with Jason Hammel.