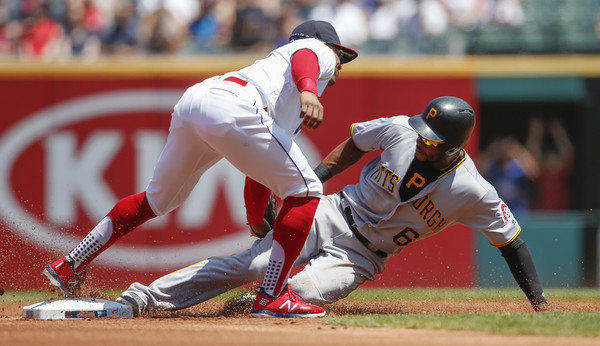 All good things must come to an end and today that meant the Pittsburgh Pirates eleven game winning streak.  Pittsburgh ran into a red-hot pitcher, who quieted the Pirates bats, in route to a 4-0 loss today.  The game may have not been the biggest loss of the day with Starling Marte leaving the game after being hit on the hand by a pitch in the top of the first.

Trevor Bauer started for Cleveland today and he showed why he is an All-Star caliber pitcher.  Bauer worked seven innings allowing only two hits, while striking out ten and walking two batters.  Adam Cimbar collected the first two outs of the ninth before giving way to Brad Hand for the final four outs of the game.  Of those four outs, Hand would collect three of them for strikeouts.

Jameson Taillon was tasked with keeping this winning streak alive and did all he could to do so.  Taillon would also throw seven innings allowing two runs on seven hits with five strikeouts and one walk.  Those two runs came off the bat of Edwin Encarnacion in the third on a two RBI single to left center field.  Kyle Crick and Felipe Vazquez pitched the eighth inning and each was charged a run on a two-run homer by Yonder Alonso.

The Buccos offense was a no show today.  They would only collect three hits on the day with Jordy Mercer, Jacob Stallings, and Adam Frazier each collecting one.  Frazier was called up from AAA today and was inserted into the game after Marte left.  Word on Marte is that there is no fracture and it is just a contusion.

It was tough to see Pittsburgh blanked today, but you can’t be mad after winning eleven of their last twelve games.  Hopefully Marte and Corey Dickerson are back in the lineup very soon to lead this Pirates lineup.  The Buccos will return home tomorrow night to begin a four-game series with the New York Mets.  Nick Kingham will pitch for Pittsburgh, while New York will counter with Steven Matz.