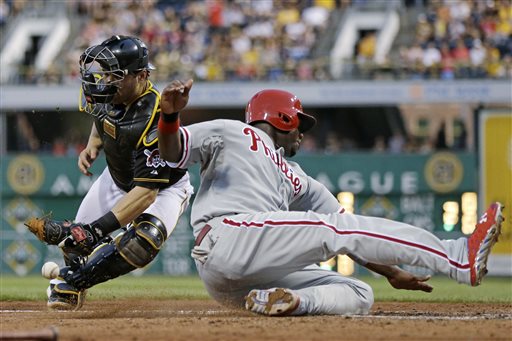 The Pittsburgh Pirates had a great first half of the season, but their main concern going forward looks to be the woes of the offense.  Tonight the lack of bats ended up costing the Buccos game one of this three game series with the Philadelphia Phillies 3-1.

Brandon Cumpton was called up to make a spot start, since Jeff Locke warmed up to pitch Sunday afternoon in extra innings.  Cumpton did what he has done in his three other starts, kept his team in the game.  Through the first five innings, he did not allow a run, struck out three, and only allowed two hits.  The sixth inning is when he hit a wall and Philadelphia put up their three runs.  He would leave the game after collecting two outs.  The bullpen was superb once again pitching the final 3.1 innings to keep the game close.

The offense, other than Garrett Jones solo home run in the sixth, was pathetic tonight.  They would leave nine men on base, while only collecting six hits.  They had two opportunites for a big inning, the first was in the third.  Jones stepped to the plate with the bases loaded, but would strike out swinging.  The bases were full of Bucs again in the eighth, but it was the same result except it was Jordy Mercer playing the role of strikeout victim.

Hopefully the Pirates can collect a few more clutch hits to support Jeff Locke tomorrow night.  They do have the opportunity to continue the trend of winning the series after losing game one.  First pitch tomorrow night will be at 7:05pm.