Pirates Wrap Up Road Trip With Win Over Mariners 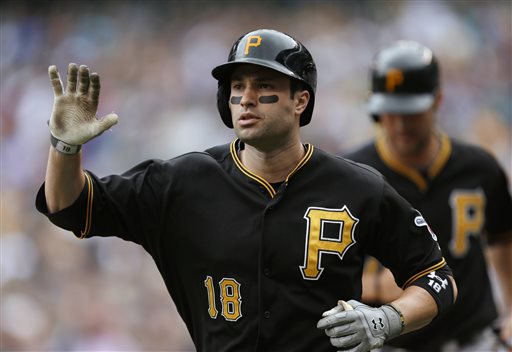 They say there is no place like home, but for seven of the last nine games the road has been mighty nice to the Pittsburgh Pirates as they defeated the Seattle Mariners 4-2 before coming home.  While these two teams only played four times this season, today would mark the second time that the Buccos faced former Cy Young award winner Felix Hernandez.  Pittsburgh would counter with Jeanmar Gomez, who was making his first start since coming off the DL.

Through the first three innings of this game both pitchers were lights out.  That all changed in the top of the fourth.  Garrett Jones would draw a walk and then with two outs Neil Walkerwould hit a home run to right field to give Pittsburgh a two run lead.  The M’s cut the lead in half in the bottom part of the inning.  With the shift on, a ground ball was hit to Gaby Sanchez that looked like a typical double play, however, Pedro Alvarez and Jordy Mercer both went to cover second, neither one of them caught the ball, which lead to runners on first and third with one out.  Michael Saunders then drove that runner in with a sacrifice fly.

Gomez would pitch one more inning and leave after a successful first game back.  His final line was five innings pitched with zero earned runs on three hits, while striking out five and walking two batters.  He has pitched very well in the rotation and may have only a few more starts left before heading back to the bullpen once other starters return from the DL.

Seattle was able to tie the game in the sixth when Raul Ibanez hit a solo home run.  Hernanadez stayed in to pitch the seventh and was able to strike out eleven Pirates before leaving the game with a no decision.

The ninth inning is when the Buccos put the icing on the cake as Pedro Alvarez led the inning off with a single and then advanced to second on a Walker sacrifice bunt.  With two outs, the Mariners intentionally walked Travis Snider to face Jordy Mercer.  Mercer would make them pay when he doubled home the go ahead run.  A wild pitch by Charlie Furbush would give Pittsburgh an insurance run, that thankfully they did not need, as Mark Melancon induced a ground out to first with two runners on to finish off the game.

This was a great road trip for the Pirates as they were able collect seven wins in nine games away from PNC Park.  They will return home after a day off Thursday to begin a three game series with the Milwaukee Brewers.  Hopefully the Buccos are able to build on this momentum they have gained in front of the home fans.