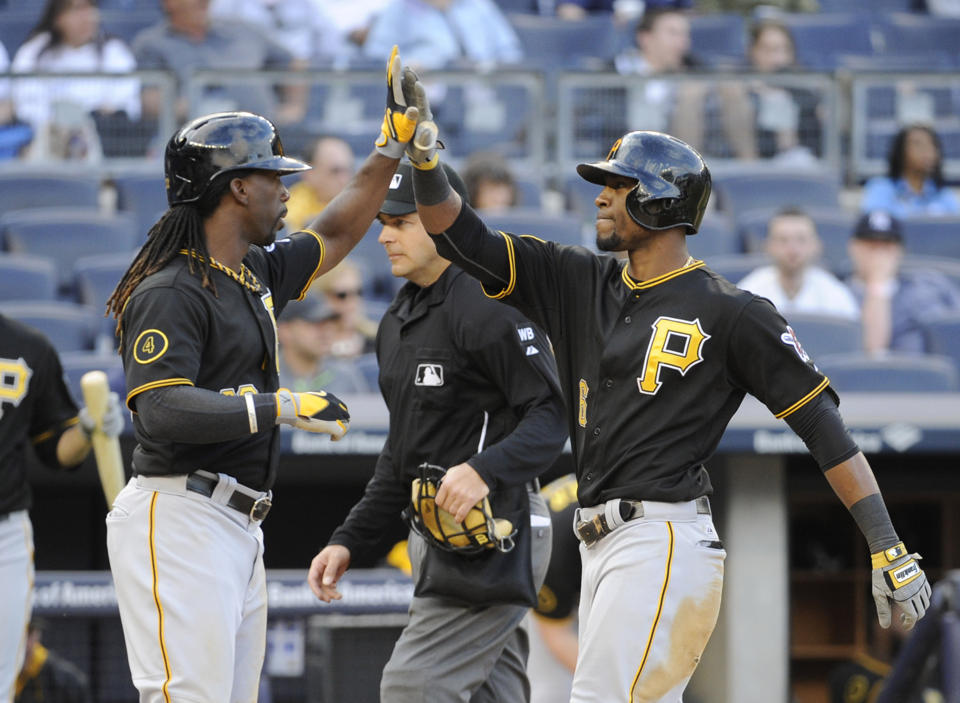 After a rainout in game one of this three game series between the Pittsburgh Pirates and New York Yankees a doubleheader was scheduled for Sunday in this interleague matchup.  Pittsburgh has a hard enough time taking down New York in the Bronx, as they have gone winless since game five of the 1960 World Series, but surely they could take at least one of a doubleheader, right?

Game one starter for the Pirates was Charlie Morton and his start today was eerily similar to his last start a week ago against the St. Louis Cardinals.  Morton gave up three runs in the first and then one in the second.  After that he was lights out through the seven innings he pitched.  He collected six strikeouts, while walking one, and allowing six hits.

The Bucco offense tried to give Ground Chuck enough run support for his first win of the year.  Neil Walker started the game off with a solo homer to right field that gave Pittsburgh its only lead of the day.  The fifth inning is when the Pirates made a comeback push.  Tony Sanchez would hit a solo shot to left field that cut the lead to two.  Later in the inning with Clint Barmes on third, Walker would hit a line drive off the glove of Yankees third baseman Kelly Johnson that cut the New York lead to 4-3.

That would be as close as the Buccos could get as Morton dropped to 0-6 on the year.  The loss also clinched another lost road series and road trip for Pittsburgh.

After a half hour break game two would begin and the Pirates would jump out to an early lead with former Yankee Chris Stewart hitting a shallow single to right field that scored Starling Marte.  The down side of this was that when Jose Tabata went from first to third, he was thrown out after pulling up with an apparent hamstring injury.

New York took the lead in the bottom part of the second with the help of a couple Bucco errors.  John Ryan Murphy would single to rightfield, when the ball got between Travis Snider’s legs it would allow Yangervis Solarte to score from first and Murphy to reach third.  Brendan Ryan would then bunt, scoring Murphy, and then reach second on a throwing error by Gerrit Cole.

Cole would work through six innings allowing three runs on seven hits, while striking out eight and walking two.  In the top part of the sixth Starling Marte would hit a solo home run to give Pittsburgh back the lead.  Marte then left the game with hamstring tightness, leaving the Pirates down two outfielders.  The Yankees struck quick once again with a solo homer by Solarte.

The back and forth match continued when player of the game Josh Harrison hit what would be the game winning homer to left field.  The Buccos were able to add an insurance run in the ninth with a sac fly by Stewart.

While Pittsburgh was able to avoid the sweep and pick up their first win in the Bronx in almost 54 years, it came with Tabata and Marte leaving the game with injuries.  Will they be required to spend time on the DL?  If so who will come up?  Jaff Decker came up when Marte was out with the back injury, but if a second player is needed will the Pirates management be willing to call up Gregory Polanco before June 1st.

The Buccos will have an off day on Monday before beginning a six game homestand on Tuesday.  Up first will be two with the Baltimore Orioles, who swept Pittsburgh at Camden Yards in a doubleheader back on May 1.