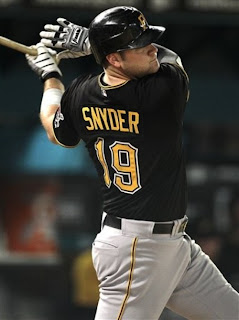 The new year is less than a week old and pitchers and catchers are set to report to Bradenton, Florida in just over a month. As it turns out, the catcher position is actually one of the more discussion-friendly topics for this young team.

Chris Snyder and Ryan Doumit are collectively due $11 million in 2011, as both catchers are entering the final season of three-year contracts. Snyder will certainly get the initial nod for the starting position, but Doumit can still play a valuable role for the Buccos this season, as was confirmed by general manager Neal Huntington.

Undoubtedly, Snyder provides more defensive stability and consistency over Doumit, and while Ryan has the hot-bat capabilities from time to time, the injury-prone catcher simply hasn’t delivered for the Pirates for an entire season, which is most likely what led the Buccos to search for a catcher elsewhere, ultimately snagging Snyder from Arizona.

The only other catcher on the Pirates’ roster currently is Jason Jaramillo, who had a strong 2009 season, but after his dismal performance last year in limited opportunities with the club, he will more than likely spend a bit of time at Triple-A Indianapolis. The only chance Jaramillo will see extended play in Pittsburgh is in the event that Doumit is dealt away prior to Opening Day 2011. This seemed more likely a month ago, but now, only a slight likelihood. But as well all know, the Pirates are always good for a surprise or two throughout the year.

Check out article on the Pirates’ catcher situation at the Pirates Official Website.