Pitching And Home Runs Lead The Way For Pirates 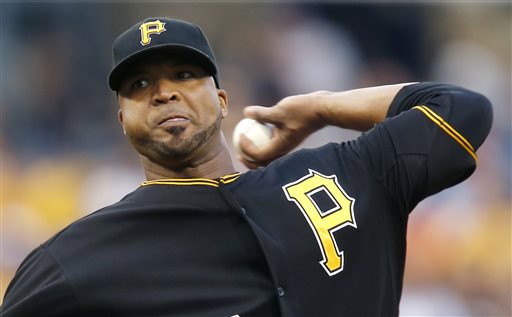 The winning streak is now at eight, as the Pittsburgh Pirates top the Milwaukee Brewers 2-1 tonight in front of a sellout crowd at PNC Park.  It may have not been an action packed game like we have seen over the course of this win streak, but the Buccos battled with tough pitching and stellar defense.

Francisco Liriano had another good outing on the mound tonight during his six innings of work.  The only jam he got himeself into was in the fourth when Chris Gomez led the inning off with a triple.  However a strikeout, fielder’s choice, and groundout allowed the Pirates to maintain the 1-0 lead they had at the time.  Liriano would allow one run and seven hits, while striking out six and walking one.  He may want to work on his offense a bit as he failed to move a runner over with a bunt and then was thrown out at home when he hesitated to leave third.

With pitching like that from Liriano, it only took two swings of the bat for Pittsburgh to pick up the win.  Swing one came off of the bat of Pedro Alvarez in the second inning.  The ball would clear the right field seats and after hitting some trees, would find its way into the river.  Home run two of the evening would be courtesy of Garrett Jones.  His ball would land in the bushes out in center field.

The Shark Tank wrapped up the final three innings to hold the Brew Crew in check.  Tony Watson pitched the seventh without allowing a runner to reach base.  Mark Melancon worked the eighth, striking out two, with only one runner reaching base when strike three got past Russell Martin.  It was grill cheese time in the ninth, as Jason Grilli set down Milwaukee 1-2-3 to pick up save twenty-seven on the season.

With the win the Pirates are the first team to reach fifty wins this year and are currently a game ahead of the St. Louis Cardinals for the top spot in the Central Division.  This three game series will wrap up tomorrow afternoon at 1:35pm with Charlie Morton facing Kyle Lohse.