Pitching And Offense Come Together In Win 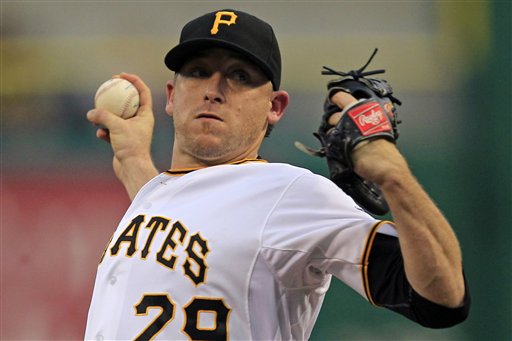 What if? What if the Pittsburgh Pirates had played more like this over these past two months?  If they had, then maybe this would not be the final series with the Atlanta Braves.  Maybe this would be a wild card preview for Friday.  However, we Pirates fans have been asking what if for twenty years now.  Tonight’s 5-1 win for the Buccos had all three phases, pitching, defense, and offense go well for them.

Kevin Correia picked up win number 12 on the year, not bad for a guy considered the scapegoat of the pitching staff since the start of spring training, in what may be his final start in a Pittsburgh uniform.  He would last 6.2 innings striking out five walking one and allowing one run on six hits.  That lone run came in the fourth on a Juan Francisco double that scored former Pirate Lyle Overbay.

The bullpen would take over after that with Justin Wilson, Chris Resop, and Bryan Morris allowing a combined two hits with three strikeouts over the course of 2.2 innings pitched.  While Morris’s opportunites have been limited in his time in the majors he has shown the ability throw strikes and get outs, so look for him to make a case to be on the opening day roster in 2013.

The Bucco offense got contributions from the usual cast tonight.  It started in the first on an Andrew McCutchen ground out that scored Starling Marte.  Pittsburgh earned another run in the second when Clint Barmes singled home Josh Harrison from second.  The fifth inning saw the Pirates close the deal on this game with three runs.  Alex Presley doubled home Marte, which was followed up two batters later by Garrett Jones hitting a two run shot to right field.

This was a fun game to watch tonight and makes me a sad that tomorrow’s 12:35 finale will close out the 2012 season.  A.J. Burnett will take the hill for the Buccos looking to close out PNC Park with another great performance.   While this may be it for 2012, it is less than six months until opening day 2013.