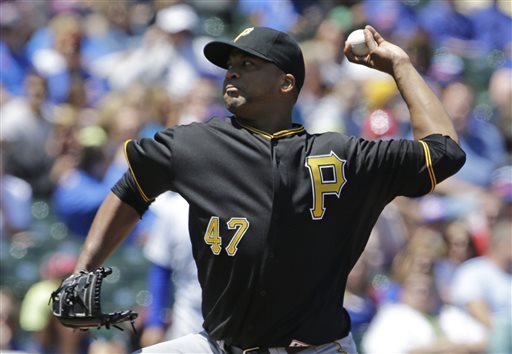 The Pittsburgh Pirates had to be a happy to leave Atlanta for the friendly confines of Wrigley Field to begin a three game series with the Chicago Cubs.  With the rotatin down to three at the moment, Francisco Liriano has become one of the Buccos better pitchers and with an offense struggling, he would need to be on top of his game to lead Pittsburgh to victory.

Liriano pitched well today over the course of his seven innings of work.  He only allowed two hits, while striking out eight.  The five walks did place him in some tense moments, but he was able to work his way out of any jam that came across his path.

The Pirates mangaged seven hits today, two of those would lead to runs.  The sixth inning is when the scoreboard finally did some work on the day.  Russell Martin hit an RBI double that brought Jordy Mercer across the plate.  Mercer had a good day starting at short today, as he, along with Martin, were the only two Buccos to collect multiple hits.  Pittsburgh was able to add an insurance run in the top of the ninth when Travis Snider grounded into a fielder’s choice that scored Martin.

The offense is still having their share of struggles as Starling Marte, Andrew McCutchen, Gaby Sanchez, and Travis Snider all started today, but were unable to collect a hit.  They also left fourteen men on base and currently have no one on the twenty five man roster batting higher than .286.  These things will need to be fixed shortly, but for now we should enjoy the 2-0 victory.

It will be a late afternoon contest between these two teams tomorrow as first pitch is at 4:05pm.  It will be an opening day rematch as pitchers A.J. Burnett and Jeff Samardzija oppose each other on the mound.