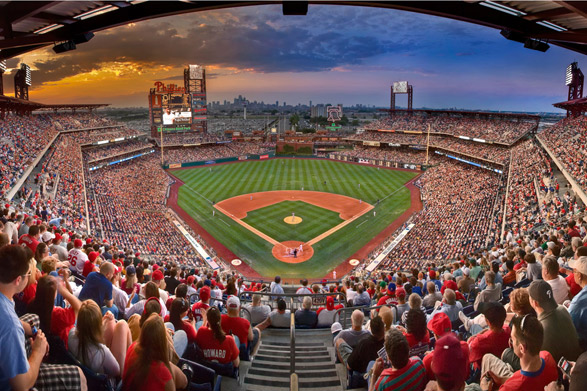 The Pittsburgh Pirates embark on a rather interesting road trip this week in two cities that they have royally struggled over the years.  But there’s reason to believe that this year might be different.  After all, the team is playing some of its best baseball of the entire season, having won eight of their last nine series, including this past weekend’s three-gamer over the Detroit Tigers.

The Bucs have a 38-33 record, just one game behind the N.L. Central division leading Cincinnati Reds.  They finished up Interleague Play with a 10-8 record against the American League, and now face two N.L. teams that have had their number in recent years, beginning tonight at Citizens Bank Park against the Philadelphia Phillies.

Having allowed only 10 total runs on this past home stand, the pitching staff is once again performing like one of the best in baseball.  A.J. Burnett and James McDonald continue to solidify themselves as the two aces of the staff, mowing down the opposition and consistently putting their team in a position to win, which…as of late…the offense has been able to accomplish.

Andrew McCutchen is playing like one of the best in the National League, while guys like Garrett Jones, Pedro Alvarez, and Casey McGehee are swinging the bat dangerously well.  At this point, with the exception of a Clint Barmes in the eighth spot, there are no widely vacant holes in this lineup.  Things are looking bright right now for a Pittsburgh Pirates’ fan.

That being said, consistency and longevity are what this season has to be about for the Bucs.  We all saw what happened to the team last year down the stretch.  This week’s road trip, beginning in Philadelphia tonight, will be a nice test to see where the Pirates stand this year as in comparison to previous seasons.

It hasn’t exactly been a picture perfect season for the Philadelphia Phillies thus far in 2012.  They are six games under .500, are in last place in the N.L. East, nine games behind the division leading Washington Nationals.  They have been devastated by injuries and inconsistent play.  Chase Utley and Ryan Howard have yet to play a game this year, while RHP David Herndon, RHP Mike Stutes, and RHP Jose Contreras are all out for the season.  Howard and Utley, though, should both be back in the lineup within the next one or two weeks, and they’ll be returning to an offense that desperately needs their leadership and production.

From a pitching standpoint, Roy Halladay is also on the D.L. currently, while a majority of the rotation has underperformed significantly.  In fact, given the injuries and the underachieving of most of the ballclub, it’s incredible this team has won as many games as they have this year.  Surely, when this team is healthy later in the season, they’ll make a hard run to the top of their division.

With Howard and Utley out so far this year, Hunter Pence has emerged as the club’s leading offensive threat.  He has a .272 average to go along with 13 HR and 42 RBIs, leading the team in both of those categories.  Carlos Ruiz is the only Phillies’ player to be over the .300 mark, hitting for a .348 clip in his 65 games this year.

The Phillies have dominated the Pirates at Citizens Bank Park since it opened eight years ago though, winning 18 or 23 games between the two.  The Bucs haven’t won a series in Philadelphia since taking two of three at Veterans Stadium in April 2003.  Ouch.

[box_dark] “Different guys are coming through, getting on base and getting big hits.  What we’re doing now, hopefully we can continue and keep the momentum going.” [/box_dark]

Andrew McCutchen on the Pirates’ offense in June

[box_dark] “We have trouble and there’s no getting away from it.  There are three phases of the game.  There’s pitching, defense and hitting.  We’re dysfunctional at nights in two of those phases.” [/box_dark]

After another impressive home stand at PNC Park, the Bucs are back out on the road for what will be two hard-fought series in hostile environments where they have struggled in the past…beginning tonight with the first of four at Citizens Bank Park.  Stay tuned right here for recaps and reactions to each and every Pirates’ game from us, the Fans From The Stands!