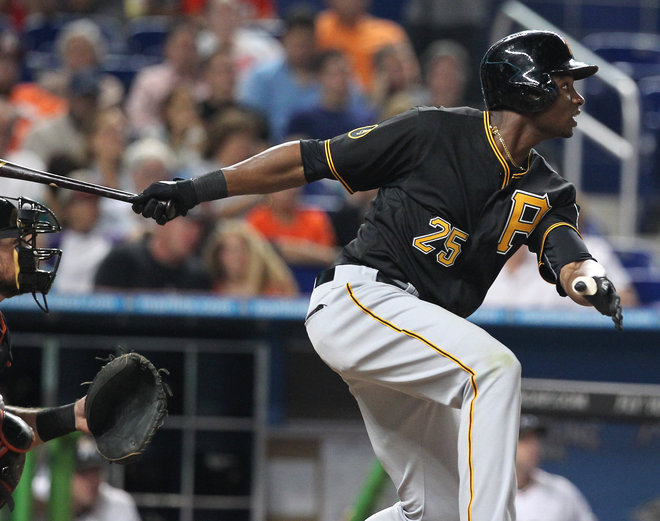 There could be a number of different ways Pittsburgh Pirates fans could remember tonight’s game against the Miami Marlins.  It could be the continued streak of the red hot offense.  Perhaps it could be the impressive performance by Jeff Locke.  Or it could be the dismal performance by the bullpen to force the game into extra innings.  But after all was said and done tonight in Miami, Gregory Polanco stole the show, tallying five hits including the game winning two run homerun in the 13th as the Pirates beat the Marlins, 8-6.

The Bucs’ right fielder went 5-7 with a homerun, four singles, two RBIs, and three runs scored, bumping his average up to .381.  Starling Marte added four hits of his own, while Andrew McCutchen, Ike Davis, and Clint Barmes each had two hits.

Locke was solid tonight for Pittsbugh, giving up two runs on seven hits with zero walks and seven strikeouts through eight innings of work.  It was almost a forgone conclusion that he would earn the victory, but shockingly, the bullpen couldn’t hold the lead.

The Pirates took the lead early on a two run homerun by Marte, scoring Polanco who led off the game with a single.  Jeff Mathis singled in the bottom of the second, scoring Jeff Baker to cut the lead to 2-1.

The two clubs traded runs in the third inning thanks to their respective superstars.  McCutchen’s single scored Marte, but after a solo homerun by Giancarlo Stanton in the bottom half, the Bucs led 3-2.

Pittsburgh appeared to put the game away with a three-run fifth inning.  Davis doubled home Polanco and Marte, and he later scored on a single by Jordy Mercer.  The Bucs took a 6-2 lead and looked poised to coast to victory.

The ninth inning was as frustrating as this Pirates fan can remember in quite some time.  The Marlins scored four runs while recording only ONE hit.  Justin Wilson started the inning with a walk to Marcell Ozuna, and after striking out Garrett Jones, walked Adeiny Hechavarria.  Jason Grilli then relieved Wilson, and immediately walked Mathis.  Ed Lucas’s ground out scored Ozuna, and after a walk to Rafael Furcal, Grilli gave up a two run single to Reed Johnson with the bases loaded, bringing the Marlins within a run.  After Stanton was intentionally walked, Grilli was pulled in favor of Mark Melancon, who gave up a bases loaded walk to Casey McGehee, tying the game, 6-6.

The game remained tied until the top of the 13th when Polanco tallied his fifth hit of the night, a two run homerun of Mike Dunn, scoring Barmes to give the Bucs an 8-6 lead.

This was a rollercoaster ride of a ballgame for the Pirates.  After the ninth inning, it looked as though the Marlins would steal this game.  But the ability to come back and win this game shows their character, led tonight by Polanco, who had a huge night in just his fourth game of his MLB career.

The Pirates and Marlins will match back up tomorrow night for the second game of the series.  First pitch is scheduled for 4:10pm.