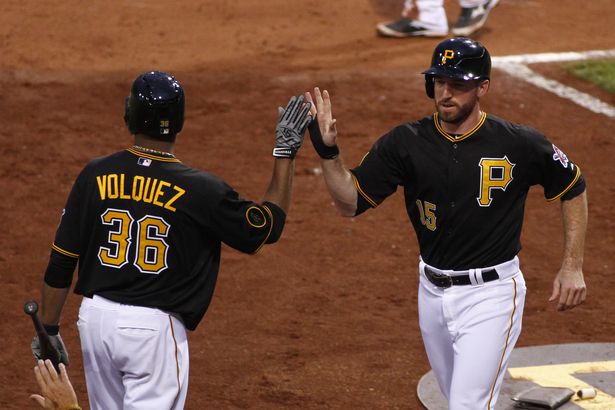 The Pittsburgh Pirates wrapped up a seven game home stand with a 4-0 victory over the Chicago Cubs.  Tonight’s game started late and then was delayed in the seventh inning by rain.  The starting pitching of Edinson Volquez really keyed the win tonight.

Volquez completed all seven pre rain innings, shutting out Chicago on seven hits, while striking out five and walking two.  This start has continued a trend of good outings by the starting rotation, even with a few callups from AAA.  Tony Watson pitched the eighth inning and would only need fifteen pitches to strikeout the side.  With only one inning left, Jared Hughes would be summoned from the Shark Tank and would set down the side in order.

Pittsburgh would collect ten hits tonight, but back to back two run innings is all the scoring they would need.  In the fourth inning, Russell Martin put the only run on the board that the Pirates would need tonight with a ground rule double.  Jordy Mercer would add a sacrifice fly to make it a 2-0 Buccos advantage.  In the fifth Andrew McCutchen scorched a would be triple to left center field for two RBI, unfortunately for McCutchen a bit of over celebration at third resulted in him being tagged out while his foot was off the bag.

Overall it was a pretty good home stand for Pittsburgh.  While it would have been nice to take two of three from the Milwaukee Brewers, they were able to go 4-3 with a few injuries popping up along the way.  The Pirates will begin a short road trip tomorrow night, when they start a three game series against the Miami Marlins.