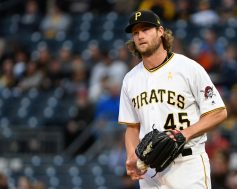 It’s becoming extremely difficult to watch the Pittsburgh Pirates.  The downward spiral of the 2017 season continued tonight for the Bucs, who fell to the Cincinnati Reds by a 7-3 score at PNC Park.

Gerrit Cole made the start for Pittsburgh tonight against Luis Castillo for the Reds.  After pitching a shutout last weekend against Cincinnati, Cole struggled tonight, giving up five runs on six hits in six innings.  Castillo only made it through four innings, giving up two runs on three hits.

Things started out poorly for Cole and the Pirates immediately.  Billy Hamilton led off with a single, stole second, and advanced to third on a throwing error by Chris Stewart.  After Zack Cozart walked, Joey Votto doubled off the wall to score the game’s first run.  Adam Duvall’s two run double off the wall made it 3-0, and the Reds were off and running early.

A double by John Jaso in the second scored David Freese to get the Bucs on the board.  Stewart’s RBI single later in the inning scored Jaso, making it a one-run game.

Scooter Gennett’s RBI single with two outs in the third increased the Reds’ lead to 4-2, and they added another run on a sacrifice fly in the sixth to make it a 5-2 lead. They would score another pair of runs in the eighth, making it 7-2, much to the disgust of the PNC Park crowd.

A bloop single by Josh Bell scored Josh Harrison to make it 7-3, but that was as close as the Pirates would get, as the Reds would go on for a comfortable victory.

Well it was another day and another loss to an N.L. Central opponent for the Pirates.  They have now lost four straight games, and have now lost ten games to the Reds this year.  They are nine games under .500, the pitching is sub-par, the defense is atrocious, and the offense is unreliable and inconsistent.  They are in a tailspin right now, and it’s very difficult to watch.

The Pirates will look to snap their four game losing streak tomorrow night at PNC Park in the second game of this weekend series.