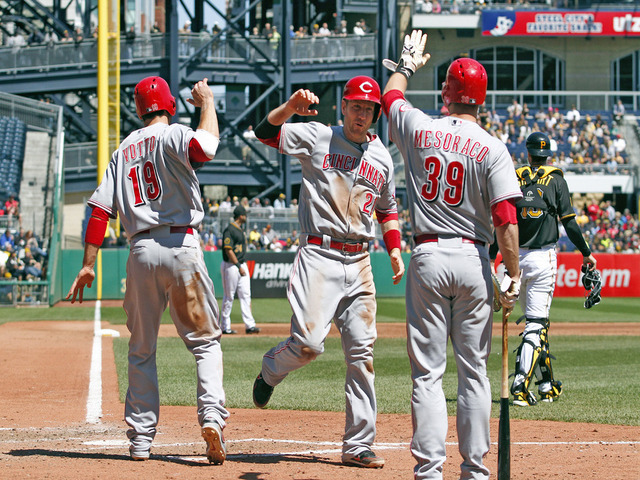 After much speculation, it was made official this morning that Brandon Cumpton would make his season debut for the Pittsburgh Pirates this afternoon against the Cincinnati Reds at PNC Park.  Cumpton took Wandy Rodriguez’s spot in the starting rotation, and set out today to help the Bucs earn a series split with the Reds.

Cumpton pitched well in his season debut, but a two run double was all it took to leave him with the loss as his offense couldn’t muster together any more than a single run in nine innings of baseball.  The Reds scored a pair in the sixth and held on to win, 2-1, taking three of four games from the Pirates this week.

The Pirates took the lead in the first inning off Cincinnati starter Tony Cingrani.  Neil Walker drew a 1-out walk, advanced to second on an Andrew McCutchen single, and scored on Pedro Alvarez’s RBI single.  The Bucs had at least one runner on base in each of the first three innings, but they were unable to muster anything more than the one run.

After threatening for much of the afternoon, the Reds finally broke through against Cumpton in the sixth inning.  Joey Votto was hit by a pitch to lead off the inning, and advanced on Brandon Phillips’ ground out.  After Todd Frazier was also hit by a pitch later in the inning, Ryan Ludwick hit a two run double to centerfield, scoring Frazier and Votto to give the Reds a 2-1 lead.

The Bucs had plenty of chances to score, most notably in the third and sixth innings.  In the third, the Pirates had two on and no outs and in the sixth, two runners on and one out.  In each case, they weren’t able to tally that one big hit.  They went peacefully in the final innings to clinch yet another series loss.

It was a solid performance from Cumpton, as he gave up two runs on four hits with one walk and five strikeouts through seven innings of work.  Tony Watson and Mark Melancon each pitched a scoreless inning of relief in the losing effort.

Things are looking bleak for the Bucs at this point.  While it is still very early, things need to turn around and turn around fast.  The Reds and Milwaukee Brewers have each won both series they’ve played against the Bucs.  After completing a horribly disappointing 2-6 home stand, they hit the road for a three game series beginning tomorrow against the St. Louis Cardinals.