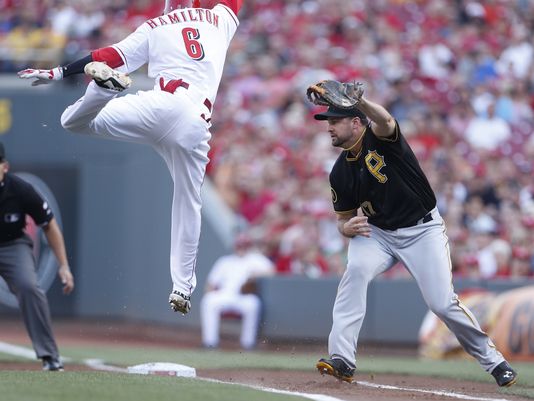 As frustrating as the first series of this road trip was for the Pittsburgh Pirates, tonight’s game against the Cincinnati Reds might have been even worse.  The Reds rallied from four runs down to edge the Bucs at Great American Ballpark, 6-5.

It looked like it could be a rough night for Pirates’ starter Jeff Locke, who gave up a run without recording an out in the first inning.  Billy Hamilton led off the game with a bunt, which Gaby Sanchez fielded but was unable to make the tag on the speedy centerfielder.  They ruled it a hit for Hamilton, who scored on the RBI double by Zack Cozart, putting the Reds ahead early, 1-0.

The Pirates put a crooked number up in the fourth inning off Reds’ starter Mat Latos.  Andrew McCutchen crushed a solo homerun to deep center field to tie the game.  Later in the inning, Pedro Alvarez delivered the huge blow with a three run blast to deep right, scoring Neil Walker and Russell Martin.  The Bucs’ catcher smacked an RBI single in the sixth, scoring McCutchen to push the lead to 5-1.

Cincinnati scored two runs in the bottom of the seventh to bring the game to within a 5-3 score.  Ramon Santiago’s double scored Ryan Ludwick, and later in the inning, Hamilton’s ground out scored Santiago.

It was a night to forget for Tony Watson, who got tagged for three runs on five hits through two-thirds of the eighth inning.  Devin Mesoraco’s two-out solo homerun brought the Reds to within a run at 5-4.  After singles by Ludwick and Chris Heisey, the Reds had runners on first and second for Santiago, who singled home Ludwick to tie the game.  Brayan Pena’s pinch hit single then scored Heisey, and suddenly the Reds had a 6-5 lead.

Aroldis Chapman came in and pitched a perfect ninth inning to seal the deal for the Reds.  After falling behind 5-1, the Reds battled back, scoring five runs in the seventh and eighth innings to steal this game from the Bucs.

Locke didn’t have his best stuff tonight, but certainly pitched solidly enough to get the victory.  He gave up three runs (one earned) on nine hits with zero walks and five strikeouts in 6.1 innings.  Unfortunately the bullpen scuffled once again, as Watson had easily the worst outing of his season.  This one will be tough to swallow, following the two games lost to the St. Louis Cardinals in walk off fashion earlier this week.

The Pirates and Reds will meet back up again tomorrow evening for the second of the three game series at Great American Ballpark.  First pitch is scheduled for 7:15pm.