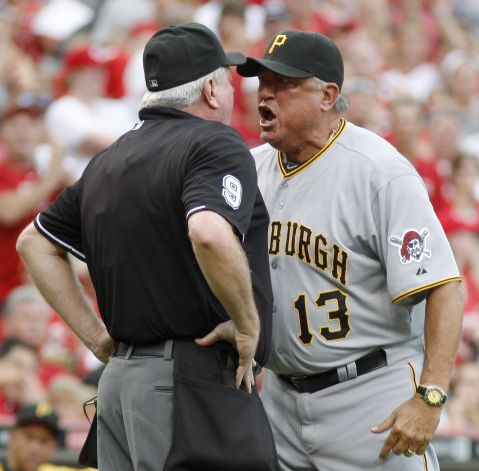 The Cincinnati Reds are the best team in National League for a reason, and tonight’s 5-4 win over the Pittsburgh Pirates was more proof.  No matter what the Pirates did, the Reds were able to counter it for nine innings.

This game had tension from the get go.  Cincinnatitook a 2-0 lead after one inning when Scott Rolen hit a two out single to right field that scored Zack Cozart and Drew Stubbs.  The Buccos battled back in the second when Michael McKenry hit his 11th home run of the year to cut the lead to one.  That wasn’t even the biggest event of the evening, as Clint Hurdle was ejected after Josh Harrison was hit by a pitch and both benches were warned.  While we may never know what was exactly said, it sure feels like Hurdle got the raw end of the deal after two of his players were beaned on consecutive nights.

Pittsburghwas able to tie the game in the third on a sacrifice fly by Neil Walker that scored Alex Presley, who led the inning off with a triple.  But the Reds were able to counter this with two runs in the bottom part of the inning.  This was how the game went all night, no matter what the Pirates did,Cincinnati had an answer.

The Buccos were able to get back to within a run in the fourth on a Josh Harrison homer.  Two innings later, the Pirates tied it up when Travis Snider hit a sacrifice fly.  Unfortunately, the Reds dished out another run in the eight.  Rolen led off the inning with a triple and scored when Todd Frazier hit a high bouncer back to pitcher Jared Hughes.  This allowed the Reds to bring in closer Aroldis Chapman during the ninth.  He was dominating once again, while striking out the final batter for the win.

This was a tough loss for our Buccos, they had chances to break the game open, but could not.  Andrew McCutchen, Neil Walker, and Pedro Alvarez went a combined 0-10.  James McDonald was better this game going six innings, allowing three earned runs on seven hits, while striking out seven and walking one batter.  The hits total was high, but if he continues to build on this game he could be closer to being his first half of the season self.

This term gets tossed around a lot, but tomorrows game is a must win for Pittsburgh.  A loss tomorrow would but them 6 ½ games back and make their main focus on making the playoffs on a wild card spot.  A.J. Burnett will look to once again pick his team up, while Homer Bailey will try to keep the Reds rolling.  First pitch is scheduled for 1:10.