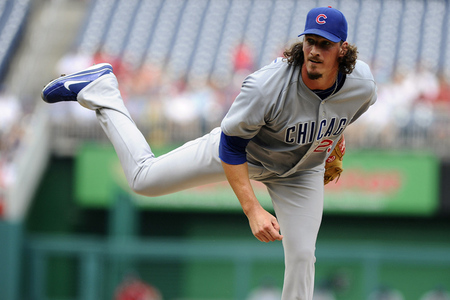 The Pittsburgh Pirates fell victim to the Chicago Cubs again on Saturday night, but it was not because of a series of errors.  Tonight it was because of a great outing by Chicago starter Jeff Samardzija.  He would go the distance, allowing two earned runs, three total, on four hits, while striking out nine Buccos and walking one.

Pittsburgh was able to jump out to a two run lead in the first inning when Pedro Alvarez drove in two runs with an RBI single to right field.  The Cubs would chip away at that lead by scoring one run in each the second and third inning.  The tie game would be broken up in the fifth on a sacrifice fly that scored Tony Campana.

Pirates starter James McDonald would leave the game with two outs in the sixth inning.  His outing was not great, but he kept the team in the game.  He would give up three runs on seven hits while walking and striking out two batters.

The Buccos would fight back to tie the game at three in the seventh on a pinch hit RBI single by Jeff Clement.  That lead did not last long as Jason Grilli would give up the game winning single to David DeJesus.  The Pittsburgh offense would send six batters to the plate over the next two innings and all would result in outs.

The Pirates continue to fall to teams that have a worse record than them and at this time of the year it just does not make sense.  Pittsburgh will try to avoid the sweep tomorrow afternoon at 1:35.  Jeff Locke will try to work his magic on the mound, while the offense will try to find some stability.