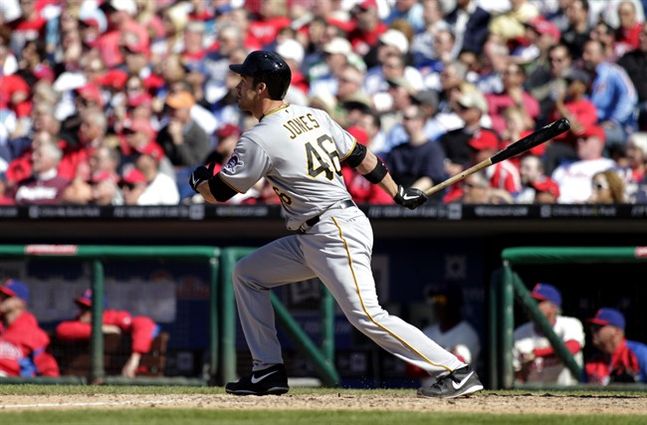 Wow!  What a series!  For the second straight series, the Pittsburgh Pirates dropped the first game, then rallied to win the next three games against an N.L. East team that has owned them in recent years.  Today, the Bucs once again fell behind early, but rallied to prevail over the Philadelphia Phillies, 6-4, at Citizens Bank Park.

Trailing 1-0 entering the sixth inning, Gaby Sanchez tied things up with a solo homerun off Phillies’ starter Cliff Lee.  It was one of two hits for Sanchez, who led the club with three RBIs on the day.  After giving the lead right back to Philadelphia in the bottom half of the sixth, The Bucs responded in the seventh with two more runs.  Sanchez’s single scored Starling Marte, and Michael McKenry’s base hit brought home Andrew McCutchen.

The Pirates took the lead in the eighth inning on a pinch-hit two run double by Garrett Jones and a sacrifice fly by Sanchez.  Though they did give up a run in the eighth inning, the Bucs closed things out in the ninth, sealing their third straight win and clinching a series victory over their cross state rivals.

James McDonald has been wildly inconsistent this year, but this afternoon, he battled his way through five innings, giving up three runs on five hits, walking three and striking out four batters.  Justin Wilson earned the win today (2-0) with his two innings of shutout baseball, while Tony Watson gave up a run on two hits in his work in the game’s final two innings.

This was a huge win for the Pirates.  After a come from behind victory last night, history would predict that the Bucs would come out flat-footed this afternoon and be content with a sweep.  Not today.  The team played hard across the diamond, and once again came up with some late-game magic.  Marte, Sanchez, Pedro Alvarez, and McDonald all had two-hit games, while McCutchen, Brandon Inge, Jones, McKenry, Neil Walker, and Travis Snider each added a hit.  This was a complete team victory, and a great one to see…especially against Philly.

The Pirates move on now for the second series in this road trip against the St. Louis Cardinals at Busch Stadium.  Jonathan Sanchez will take the hill for Pittsburgh against the Cards’ Lance Lynn.  First pitch is scheduled for 8:15pm.