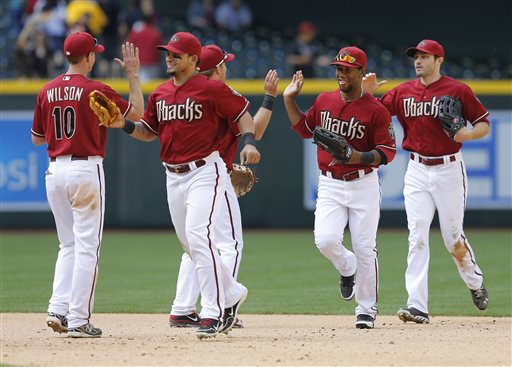 Well as we’ve always said, it’s very difficult to beat a team three games in a row…especially for the Pirates.  This afternoon’s game between the Pirates and the Arizona Diamondbacks had the makings of an ugly game for the road team.  The Bucs had outlasted Arizona the previous two games, and it was the end of a road trip and a getaway day for Pittsburgh.  Well, they certainly played like they were ready for the road trip to end, as they were demolished in the Arizona sun this afternoon at Chase Field by a 10-2 score.

Jonathan Sanchez had a solid outing in his first start of the season last week…it was certainly not the case today.  The Pirates’ left hander was torched by the D-Backs’ lineup, giving up nine runs on eight hits and four walks through 3.1 innings.  He lost his second game of the season (0-2), ballooning his EA to 12.96 for the year.  Clint Hurdle made the pitching change in the fourth inning, handing the ball over to Chris Leroux, who walked the first three batters he faced.  He ended up tossing 2.2 innings, giving up a run on two hits, while Jared Hughes finished up the game with two scoreless, hitless innings.

Unfortunately, the Pirates’ offense retracted to what it had been doing most of the season, as opposed to yesterday’s six-run “outburst.”  As a team, they tallied just two runs on five hits.  Starling Marte had two hits on the day, including an RBI infield single in the sixth inning, while Gaby Sanchez, Michael McKenry, and Josh Harrison had a hit a piece as well.

Andrew McCutchen had three at-bats before being pulled after the game was out-of-reach, while Neil Walker and Pedro Alvarez, although they did pinch hit late in the game, were held out of the starting lineup.

This was just a flat out ugly game for Pittsburgh from the very beginning.  These games are extremely difficult to watch, but fortunately, it counts as only one loss.  After a day off on Thursday, the Pirates will return to play at PNC Park, opening up a three-game series against the Cincinnati Reds.  A.J. Burnett will try to get the Bucs back on the winning track as he takes the mound for his third start of the season on Friday.