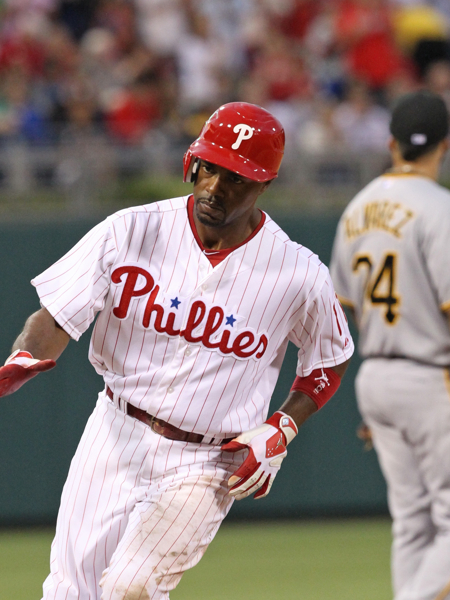 Tonight’s game for the Pittsburgh Pirates is a throw away game, just forget it ever happened and be ready to battle again tomorrow night.  The Buccos dropped game one of a four game series against the Philadelphia Phillies 8-3.  A slew of errors early on and poor pitching doomed the Pirates from the onset.

The first inning saw Philadelphiascore four runs and Pittsburghcommit three errors.  Now we all know that while the Pirates are an improved team over past years, they are not on a level where they can come back from innings like this.  Two of these errors would be by Jose Tabata, the other by Pedro Alvarez.  The fourth and final error of the night came from Clint Barmes in the fifth inning.

Of course errors of this magnitude do not help when your starting pitcher can not get a ball by the batter.  Jeff Karstens made his first start since being placed on the DL back in mid April and was touched up for seven runs, six earned, over the course of five innings.  He would give up eleven hits while striking out four batters.  Doug Slaten worked two innings tonight and only managed to give up one run after walking a run in with the bases loaded and no outs.  Jared Hughes finished the game in the eighth.

The offense showed few signs of life tonight.  Tabata hit a solo home run in the third inning off of Phillies starter Joe Blanton.  Another run crossed in the fourth when Barmes singled home Neil Walker.  The third and final run came one inning later on an Andrew McCutchen single.

Rod Barajas left the game after the first inning with a bone bruise and will be evaluated again tomorrow, look for Michael McKenry to make the next few starts.  Erik Bedard will look snap this two game skid the Buccos are on when he takes the hill tomorrow.  His opponent will be Vance Worley, whose 2.78 ERA does not match up with his 3-4 record, so it may take a pitching duel to decide tomorrow’s winner.  First pitch is scheduled for 7:05.