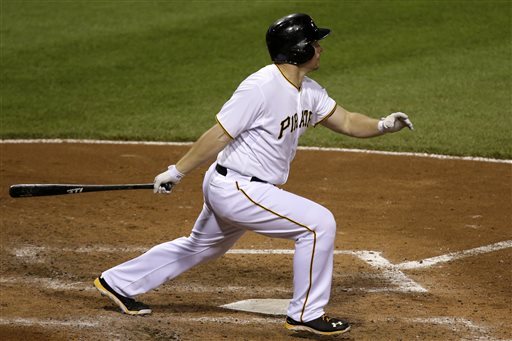 The Pittsburgh Pirates continue to battle and an off day yesterday did not seem to slow them down as they defeated the Chicago Cubs 5-4 on Tuesday night.  The Buccos were down early, but starting pitcher Wandy Rodriguez fought back, the bullpen came through again, and the offense struck at the right time.

Rodriguez pitched well tonight in his six innings of work.  Overall he would strike out five without walking a batter and allow six hits.  Of those six hits, four came in the second inning when Chicago scored three runs.  The most surprising of those hits came of the bat of Cubs pitcher Matt Garza who doubled home two runs.

Garza would have a no hitter going through 4.1 innings, as he made his season debut.  He finished the night after five innings allowing one hit and striking out five and walking three.  The Pittsburgh bats finally woke up once the Chicago bullpen was factored into the game.

The sixth inning is when the Pirates had a huge inning that would result in the winning run crossing the plate.  A bases loaded walk to Pedro Alvarez plated the first run for the Buccos.  Travis Snider would then pinch hit for Clint Barmes and hit a grand slam to right center field.

The two run lead appeared to be in safe hands with Justin Wilson pitching a scoreless seventh and Mark Melancon picking up his 16th hold in the eighth.  That would lead to the grilled cheese coming out of the bullpen.  On most nights, Jason Grilli makes picking up saves look easy.  Tonight was a little more strenuous, as he allowed one run and with the tying run ninety feet away, he would strike out Anthony Rizzo for his 18th save of the season.

Division games are never easy, but can be huge in the win column.  The Pirates try to take another series tomorrow night at 7:05pm.  Francisco Liriano will go for Pittsburgh, as Chicago will counter with Jeff Samardzija.