Stallings Walks It Off In Grand Fashion 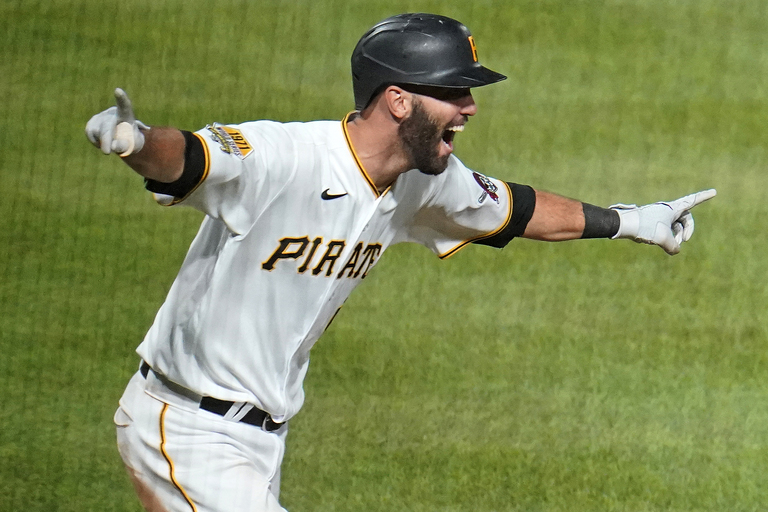 Tonight, began with a celebration of the past and ended with a celebration of the present.  Prior to the game members of the 1971 World Series Championship team were honored for the 50th Anniversary of their title season.  A few hours later the current team was celebrating at home plate with a walk off grand slam to cap off a 9-7 Pittsburgh Pirates victory over the New York Mets.

Early on this looked like it would be a low scoring contest as only two runs were scored through the first five innings.  Those two runs came in the fourth on a two-run homer by J.D. Davis of New York.  The Mets would pick up two more runs in the sixth on another two-run shot by Davis.  All four of those runs were charged to Pittsburgh starter Wil Crowe.  Crowe would pitch 5.1 innings allowing four runs on six hits with three strikeouts and three walks.

New York would pull out to a six-run lead in the seventh inning with two more runs.  The first came on an RBI double by Travis Blankenhorn.  Blankenhorn would then come home on a single by Jeff McNeil.  Kyler Keller was on the mound for both of those runs, but only one was earned.

The Pirates began their improbable comeback in the eighth inning.  It all started with an RBI double by John Nogowski.  Kevin Newman would then hit into a fielder’s choice to bring in Ben Gamel.  The final three runs of the inning would all come on a Wilmer Difo 390 ft. pinch hit home run to right center.  The Mets would add their final run in the top of the ninth when Brandon Nimmo homered off of Pittsburgh reliever Clay Holmes.  Even with that extra run, the Pirates had a big bottom of the ninth ahead of them.

The inning began with Ke’Bryan Hayes being hit by a pitch.  He would soon advance to second after Bryan Reynolds drew a walk.  Edwin Diaz would then strikeout Gamel on a pitch in the dirt, but then give up an infield single to Nogowski to load the bases.  Diaz was able to get the best of Gregory Polanco when he struck him out looking.  Jacob Stallings then stepped to the plate and pulled an inside pitch 340 ft. over the left field wall for the game winning walk off grand slam.

New York may be in first place in their division, but they sure can’t seem to figure out these Pirates.  This was the second time in a week that the Mets had a big lead late only to see their bullpen let it slip away.  Unfortunately for Pittsburgh tomorrow will be the final time that these two teams play during the regular season.  The Pirates will send JT Brubaker to the bump, while New York will counter with Taijuan Walker.  First pitch is 1:05pm.