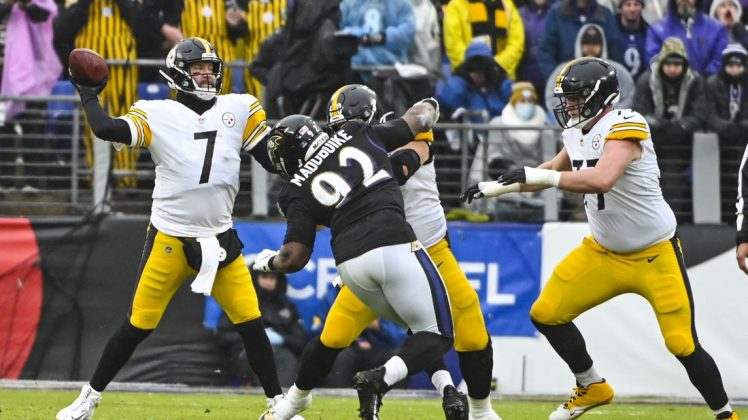 The Pittsburgh Steelers continued their improbable path toward the postseason with a narrow 16-13 defeat over the Baltimore Ravens at M&T Bank Stadium.

With the victory, coupled with an Indianapolis Colts’ loss to the Jacksonville Jaguars, put the Steelers in prime position to snag the final playoff spot in the AFC, barring a tie between the Los Angeles Chargers and Las Vegas Raiders.

Following their win over the Cleveland Browns at Heinz Field last week, Pittsburgh needed a victory, a Colts’ loss, and a “non-tie” between the Chargers and Raiders to advance to the playoffs, giving them an 8% chance to continue their season.  It seems that they have defied those odds, thanks, in large part, to a mediocre Ravens’ offense, a stifling Steelers’ defense, and timely conversions from their offense.

T.J. Watt also earned his spot in the NFL history books with a sack today, tying him with Michael Strahan for the most single-season sacks (22.5) in league history.  Meanwhile, Ben Roethlisberger, while not exactly lighting up the scoreboard, came up with throws with in mattered most, totaling 244 yards and a touchdown.

As has been the case over the course of this storied history between these two division rivals, this was a gritty matchup absent of impressive statistics.  Neither of these teams are what they have been in the past for a multitude of reasons, but today, they faced one another with a chance to advance to the postseason with a victory (and some help).  And the Steelers found a way to get it done, completing a sweep of the Ravens, winning the two games this year by a total of just four points.

Neither offense could do must today, with each team mustering just a single field goal in the first half.  A field goal by Chris Boswell in the first quarter from 28 yards out equaled by a 24 yarder by Justin Tucker in the second kept the game even at 3-3 after two quarters.

A 46 yard touchdown run by Latavius Murray gave the a Ravens a 10-3 lead in the third quarter, which, at the time, seemed insurmountable.  Pittsburgh responded with a drive that led to a 40 yard field goal by Boswell, cutting the lead to 10-6.

A six-yard touchdown throw from Roethlisberger to Chase Claypool made it a 13-10 lead, but the Ravens evened the game with a 46 yard field goal from Tucker, making it 13-13 and forcing overtime.

After forcing a Ravens’ punt, the Steelers moved down the field, converting clutch third and fourth downs on their way to setting up a game-winning 36 yard field goal by Boswell, sending the Ravens into the postseason.

For Pittsburgh, at the time of this writing, they have not yet clinched a playoff spot.  However, as long as the Chargers and Raiders do not tie in their primetime game tonight, the Steelers will snag the final playoff spot in the AFC.

Many will say that the Steelers have no place in the playoffs this year.  And while their performance on the field has been less than impressive, they have still found a way to win games when they had to, and for Ben & Co., they have earned their way to survive one more week.

Regardless of who and when they will play next week, Pittsburgh will undoubtedly be the underdog in their next game.  Can they keep their improbable season continuing beyond next week?  Who knows….let’s all find out together.