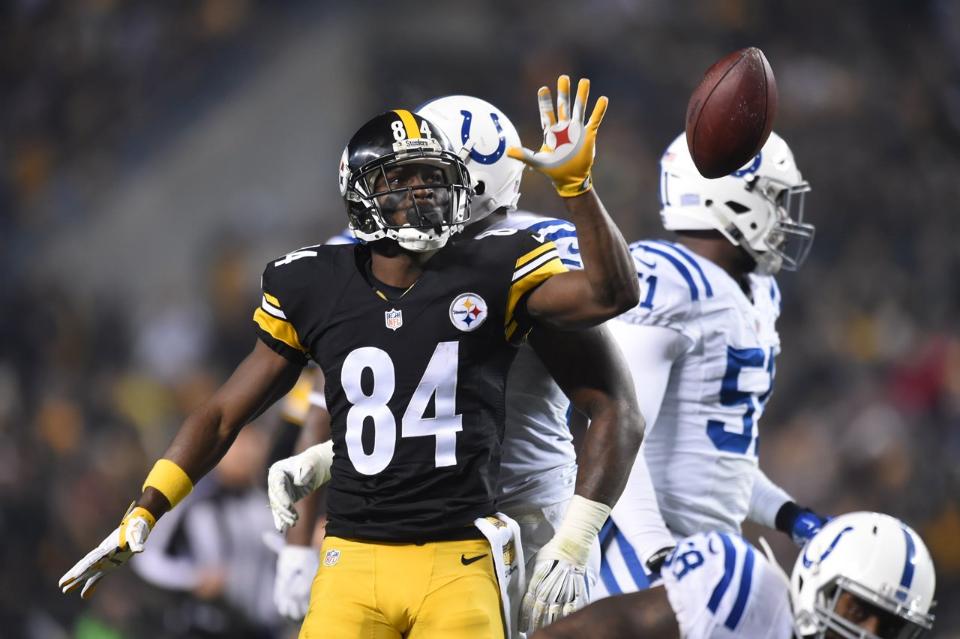 The Steelers tied the game with a field goal, before intercepting Matt Hasselbeck for the second time.  This would lead to another field goal to give Pittsburgh a 6-3 lead.  Indianapolis would score their only touchdown on the night when Frank Gore took a nine yard pass from Hasselbeck into the endzone.

From this point it was all Steelers.  Ben Roethlisberger would throw four straight touchdown passes to put this game out of reach.  He would connect with Antonio Brown for his first and fourth touchdowns on the night, and hit Markus Wheaton and Martavis Bryant for number two and three.  Roethlisberger would finish the night 24-39 for 364 yards.

Brown would finish with eight catches for 118 yards and then take a fourth quarter punt to the house for 71 yards.  He was in the game after Jacoby Jones was benched after fumbling twice earlier.  With all of this passing, it opened up the running lanes for DeAngelo Williams.  He would wind up with 134 yards rushing on 26 attempts.  Williams continues to fill in nicely for the injured Le’Veon Bell.

After a terrible showing from the defense last week, they showed up tonight.  They would win the turnover battle 3-2, which is always a key stat for victory.  James Harrison had three of the team’s five sacks.  While the offense seems to be able to put up points against anyone, the key to this team moving forward will be the defense keeping the opponent off the scoreboard.

Much needed win tonight as Pittsburgh keeps pace with the Kansas City Chiefs and New York Jets for the two Wild Card spots.  With four games left, I think the Steelers need to win three of them in order to make it to the postseason.  That being said, the focus now shifts to next week’s game on the road against the Cincinnati Bengals.