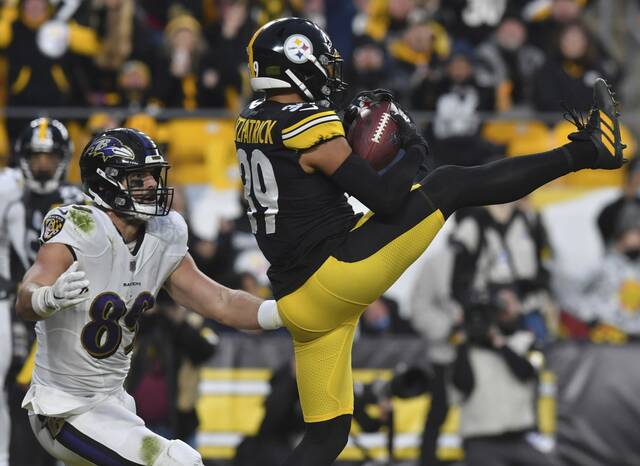 During this past week the Pittsburgh Steelers seemed to be an organization in turmoil.  Their coach appeared to have lost the locker room and their quarterback was on his way out after the season.  Those appeared to be true after two straight weeks of getting gashed against the run and not being able to put up the necessary points to pick up wins.  A 5-5-1 record made it look like they would need to win out against a difficult schedule in order to make the playoffs.

Things tend to be different when it’s rivalry week.  With the Baltimore Ravens coming to Heinz Field you could throw out the records, because these two teams always play each other close and it can’t get any closer than it did today.  A back-and-forth game came down to the last play of the game, and ultimately kept Pittsburgh’s playoff hopes alive with a 20-19 victory.

This was a defensive battle for sure as neither team could produce any points after one quarter of play.  Baltimore got on the scoreboard first when Devonta Freeman rushed for a 3yd touchdown at the 8:40 mark of the second quarter.  The Steelers would get on the board just before the half on a Chris Boswell 53yd field goal.

Baltimore would score the only points of the third quarter, with a 35yd field goal by Justin Tucker.  This would stretch the Ravens lead to seven heading into the fourth.  Pittsburgh struck first in the final quarter when Ben Roethlisberger connected with Diontae Johnson on a 29yd touchdown pass.  Boswell would miss the extra point, which meant the Steelers were down 10-9.

Tucker increased the Baltimore lead to four when he kicked a 28yd field goal with 11:54 left in regulation.  Boswell got his team back to within one on a 43yd field goal a little over four minutes later.  After the two-minute warning Roethlisberger and Johnson connected again, this time from 5yds out to put the Steelers ahead.  Pittsburgh would increase their lead to seven after a successful two-point conversion.

The Ravens showed no quit as they scored a touchdown with just :16 left in the quarter.  Instead of kicking the extra point to tie the game, they decided to go for two.  Lamar Jackson would throw an incomplete pass to Mark Andrews to keep the Steelers ahead by one.  Pittsburgh would recover the onside kick attempt to seal the win.

This felt like an old school NFL game today.  The only offensive stats that jump off the paper are the 105yds receiving and two touchdowns by Johnson.  The Steelers defense collected the only turnover, which was an interception by Minkah Fitzpatrick in the first quarter.  T.J. Watt (3.5), Chris Wormley (2.5), and Cam Heyward (1) kept the pressure on Jackson all day long.

Pittsburgh fans can enjoy this win and the prospect that their team remains alive in the hunt for a playoff spot.  This will be a short week though, as the Steelers will hit the road for a Thursday night game against the Minnesota Vikings.  Minnesota may have lost to the Detroit Lions today, but that doesn’t mean that Pittsburgh won’t need to play their best to keep their playoff hopes alive.