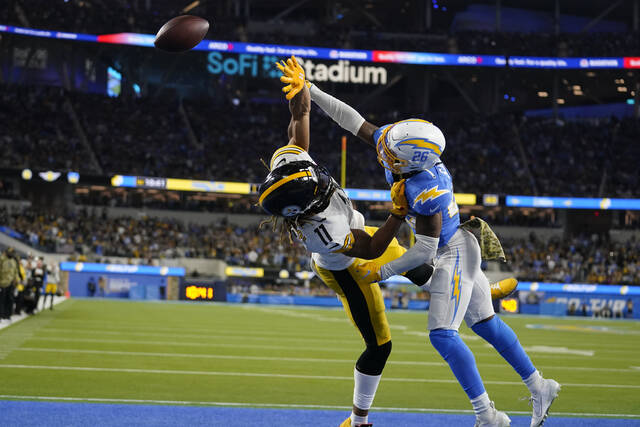 The Pittsburgh Steelers traveled west this week to take on the Los Angeles Chargers in a primetime matchup at SoFi Stadium.  Pittsburgh entered the game missing many key elements of their defense, and didn’t know until Saturday that they would have quarterback Ben Roethlisberger back in the lineup after missing last week with Covid-19.  You remember last week, when they tied the Detroit Lions at Heinz Field.

The Steelers got the ball to open the game and were able to march down the field, but had to settle for a Chris Boswell 36yd field goal.  Los Angeles wasted little time getting on the board.  They would take the lead, which they maintained for much of the game, at the 2:13 mark of the first quarter.  Austin Ekeler would rush for a 6yd touchdown, which started a huge night for himself.

Pittsburgh had a chance for points on the next drive, but could not score on four straight plays inside the five-yard line.  This allowed the Chargers to eat clock and march down the field for their second touchdown of the game.  This one would be a 10yd touchdown pass from Justin Herbert to Ekeler.  The Steelers would answer with their first touchdown of the game at the 1:15 mark of the second quarter.  Roethlisberger found Diontae Johnson for a 10yd touchdown pass.  Dustin Hopkins put three more points on the board for Los Angeles with :06 left in the half on a 30yd field goal.

It was all Los Angeles in the third quarter as they would put ten points on the board.  Herbert and Ekeler would connect for their second touchdown pass of the game a little over three minutes into the quarter.  This one would come on a 17yd pass.  Hopkins came through again seven minutes later with a 41yd field goal.  This game appeared like it was over, but a crazy final fifteen minutes kept fans from both teams on the edge of their seat.

Boswell booted a 36yd field goal to begin the scoring in the fourth quarter.  Five plays after Pittsburgh blocked a punt, Najee Harris would find the endzone on a 1yd run.  The Chargers did what they had all night, and answered.  They took the ball down field and got a fourth touchdown from Ekeler, this one a rushing TD from five yards out.

Down two touchdowns, the Steelers offense came to life and got a score to cut the Los Angeles lead in half.  Roethlisberger connected on a 5yd touchdown pass to Eric Ebron.  A huge interception by Cam Sutton would give Pittsburgh a short field and allow them to tie the game when Pat Freiermuth caught a 5yd touchdown pass.  The Steelers took the lead when their next drive led to a 45yd field goal.  That lead was short lived when Herbert connected with Mike Williams on a 53yd touchdown pass and gave the Chargers a 41-37 victory.

With key figures like TJ Watt, Minkah Fitzpatrick, and Joe Haden out on defense, we all knew it would be tough for Pittsburgh to get the win.  Los Angeles has a poor rush defense, but this Matt Canada offense seems to stay away from the run, and when you are playing catch up for most of the game it really makes your offense one dimensional.

Pittsburgh has a very difficult schedule for the remainder of the season, and they will be on the road next week to take on the Cincinnati Bengals.  Cincinnati took down the Steelers back in week three.  Hopefully there will be more healthy bodies on the roster next Sunday and some better decisions made by the coaches.