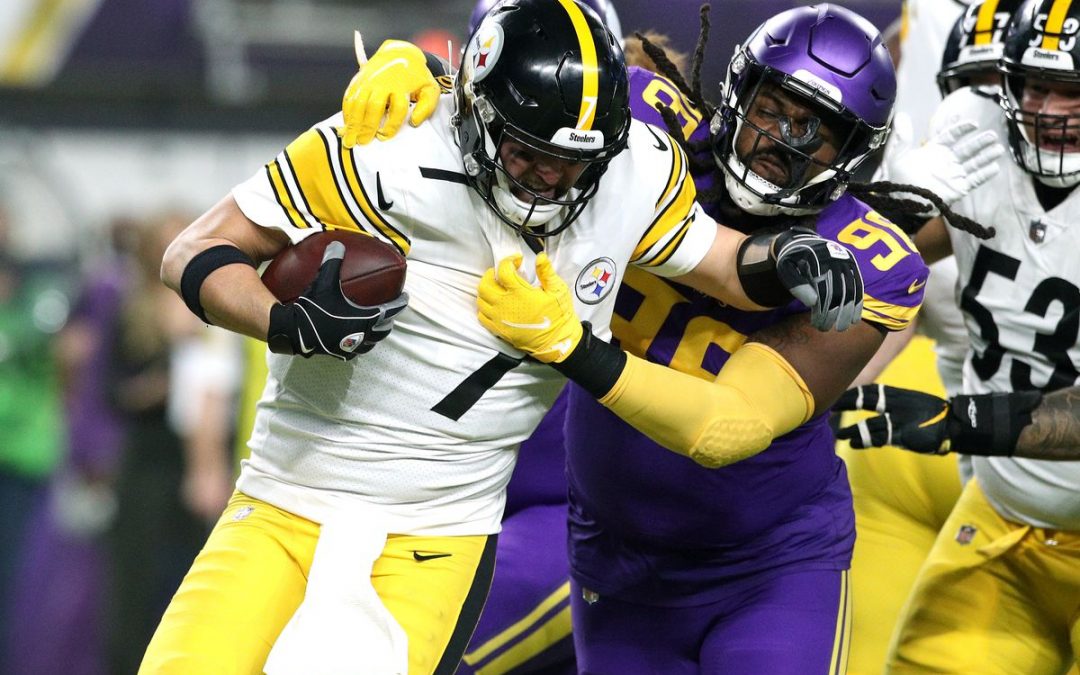 The Pittsburgh Steelers mounted a late game comeback last night against the Minnesota Vikings.  Unfortunately, the rally came up short, as the Steelers dropped a pivotal matchup between two playoff-hopeful teams on Thursday Night Football.

Minnesota dominated the first two quarters, building a 23-0 lead heading into halftime.  They added a pair of field goals in the third quarter to increase the advantage to 29-0 before the Steelers made a push to get back into the game.  Ultimately, they came up short, though, unable to duplicate what they did last week against the Baltimore Ravens at Heinz Field.  Pittsburgh fell to 6-6-1 on the season with the defeat, putting them in a dire situation with only four games remaining on the schedule.

The Vikings entered Thursday’s game with a 5-7 record, but they looked like a first place club against a lifeless, unenergetic Steelers’ team.  They took the lead in the first quarter a 14 yard connection between Kirk Cousins and Justin Jefferson.  After a Greg Joseph 38 yard field goal, Minnesota held a 9-0 lead heading into the second quarter.

The dominance continued into the next quarter, as Dalvin Cook’s 29 yard touchdown and later a 7 yard touchdown made it 23-0 heading into halftime.  Cook had a monster game, totaling 205 yards on the ground on 27 carries.

A pair of field goals by Joseph in the third quarter, from 42 yards and 25 yards respectively, increased the lead to 29-0 and it looked as though this game was going to be a laugher.

But Pittsburgh finally responded with some points.  A 65 yard drive was capped off by a touchdown pass from Ben Roethlisberger to Najee Harris from 3 yards out to make it 29-7.  Harris scored on a 1 yard run later in the quarter to make it 29-14 heading into the fourth and final quarter.

The Steelers moved 69 yards in just four plays, capped by a 30 yard reception by James Washington.  Despite the failed two-point conversion, Pittsburgh had crawled back into the game at 29-20.

Minnesota seemingly put the nail in coffin on the next drive, though, when Cousins hit K.J. Osborn for a 62 yard touchdown to make it 36-20.  But a 15 yard touchdown reception by Pat Freiermuth, as well as a converted 2 point try, made it 36-28.

Pittsburgh was able to eventually force a Vikings’ punt, and marched all the way down the field into the red zone.  But with just seconds remaining, Roethlisberger laced a pass in between three Minnesota defenders in the end zone, but Freiermuth couldn’t hang on and the game ended.

From a playoffs’ standpoint, this was obviously a devastating loss for Pittsburgh.  Despite the fact that this team was able to come back late and make it an exciting game, it doesn’t take away from the fact that there are many glaring issues with this team.  The defense was awful, allowing Cook to run for over 200 yards without much effort.  And to give up 36 points is inexcusable.

The offensive line struggled mightily for two and a half quarters, a lot of the offense late in the game, could be argued, was because of the Vikings’ willingness to play a more relaxed zone defense.

Pittsburgh will have a long break now, as they won’t take the field again until December 19 at Heinz Field against the AFC South leading Tennessee Titans.