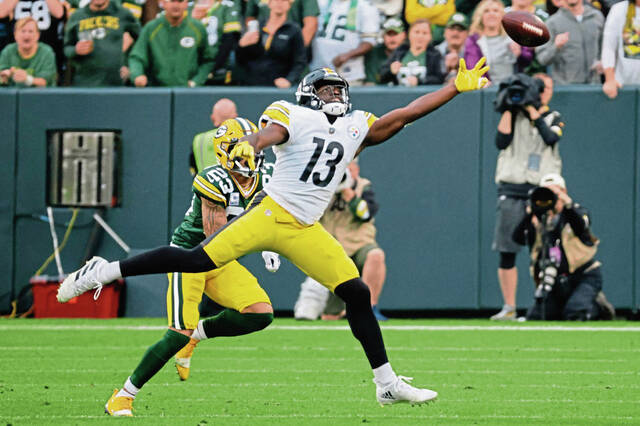 It is getting harder to take the well-known Pittsburgh Steelers phrase “The Standard is the Standard” seriously.  With how this team has played the past three weeks, the standard must be pretty low.  Pittsburgh went to Lambeau Field to take on the Green Bay Packers and left with a 27-17 defeat.  The Steelers held the lead for a time, but Green Bay showed that their talent and execution is far superior to that of their opponent.

Pittsburgh jumped out to the lead at the 10:11 mark of the first quarter.  Ben Roethlisberger connected with Diontae Johnson for a 45yd touchdown pass.  This touchdown pass would mark the 400th of Roethlisberger’s career.  The play was executed to perfection and gave us fans hope that maybe things were turning for the better.  That feeling quickly went away after fifteen minutes of play in the second quarter.

Aaron Rodgers is not known for his scrambling ability, but he was able to tie the game on a 4yd rushing touchdown.  A little over two minutes later Rodgers found Randall Cobb for a 23yd TD pass to give the Packers a lead that they wouldn’t relinquish.  The Steelers got to back within four when Chris Boswell kicked a 52yd FG with 5:46 left in the half.  Green Bay got the final points of the half on a 26yd FG by Mason Crosby.

Crosby would get the scoring started in the third quarter when he booted a 29yd FG to put his team up by ten.  The Rodgers to Cobb connection would happen again at the 4:52 mark of the quarter, this time from 1yd out and basically put this game on ice for the home team.  Najee Harris was able to score his first NFL rushing touchdown late in the fourth, but the damage was already done.

There was a controversial flag thrown prior to the half.  Joe Haden blocked a field goal attempt, which was returned for a touchdown by Minkah Fitzpatrick.  Haden was flagged for being offsides and the Packers got three points on the retry.  On the replay it looks like Haden timed the snap perfectly, so would that have been enough to change the ending? We shall never know.

The bottom line is that the offense as a whole does not look very good.  The offensive line has trouble blocking for the run and pass, Roethlisberger appears to have stayed one year too late, Harris can’t showcase his talents when he is immediately gobbled up by the defense, and the play calling is suspect at best.  Now they will return home to host the Denver Broncos in one week.  Denver has a very good defense, but could be without their starting quarterback Teddy Bridgewater since he left todays game with a concussion.