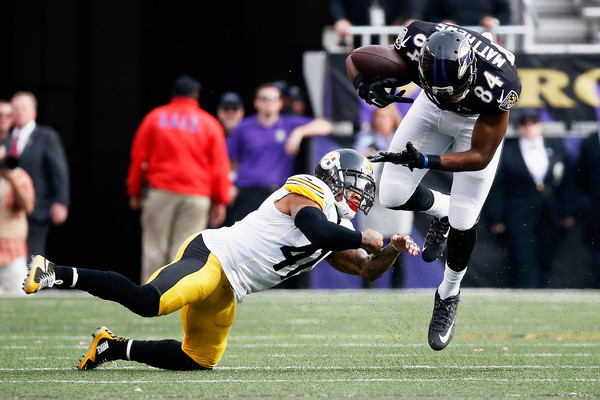 With this loss, coupled with the victories by the Kansas City Chiefs and New York Jets, and now, not only did the Steelers not clinch the playoffs this week, but they have a strong chance of missing the postseason altogether.  In addition, thanks to Pittsburgh’s loss, the Cincinnati Bengals clinched the AFC North title and the Chiefs clinched a playoff spot.

The Steelers’ offense just never got on track this afternoon in Baltimore.  Roethlisberger managed 220 yards with two interceptions, while Antonio Brown had 7 receptions for 61 yards.  Deangelo Williams was the offensive star of the game for the Steelers in a losing effort, rushing 17 times for 100 yards and two touchdowns.

Baltimore took the lead in the first quarter on an eight yard touchdown pass from Ryan Mallett to Chris Givens.  Pittsburgh responded with a 34 yard Chris Boswell field goal, but after two field goals from Justin Tucker of 37 and 50 yards, the Ravens held the lead, 13-3 at the half.

As they’ve done all season, Pittsburgh responded to make a close game in the second half.  Williams scored from a yard out in the third quarter, cutting the lead to 13-10.  Javorius Allen’s three yard touchdown run seemingly put the game out of reach.  But the Steelers marched down the field again, capped off by a two yard score by Williams, cutting the lead once again to three points.

Unfortunately, the Steelers wouldn’t get any closer, as they couldn’t make any plays in clutch situations down the stretch.  The Ravens won their Super Bowl this afternoon, improving to 5-10 while Pittsburgh suffered a crucial loss, falling to 9-5.

Today’s outcome couldn’t have gone any worse for Pittsburgh.  Entering this afternoon’s action, the Steelers could have clinched a playoff spot with a win and a Jets loss.  But now, after the Chiefs and Jets won and the Steelers lost, they need a win and some help in order to advance to the postseason.

If they are going to make the playoffs, they will need to re-focus this week in their preparation for another divisional matchup, next Sunday against the Cleveland Browns.