Steelers Season Comes To An End 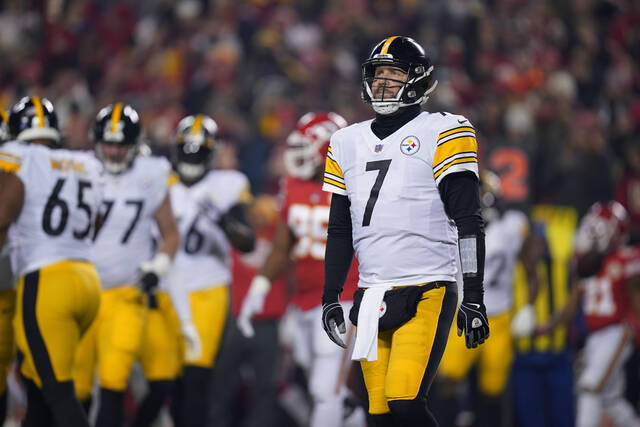 The Pittsburgh Steelers 2021 season came to an end Sunday night when they lost the Kansas City Chiefs by the final of 42-21 in an AFC Wild Card game.  While no fan wants to see a season come to an end this early in the playoffs, I think the majority of Steeler Nation knew that it was inevitable.  At no point during the year did Pittsburgh look like a Super Bowl contender and that was proven when they needed three things to happen the final weekend of the season just to get into the playoffs.

The loss in Kansas City last night also marked what was most likely the last time Ben Roethlisberger will take a snap in a Steelers uniform.  His night last night fell in line with how he performed throughout 2021.  He would finish the night 29-44 for 215 yards and two touchdowns.  Roethlisberger would also move into 3rd place for playoff passing yards in NFL history, behind Tom Brady and Peyton Manning.

After a scoreless first quarter, Pittsburgh amazingly held the lead in the second after T.J. Watt recovered a Darrel Williams fumble and returned it 26yds for a touchdown.  It would be all Chiefs after that as they scored 35 unanswered points to sure up a spot in next weeks Divisional Round against the Buffalo Bills.

The Steelers final two scores came with the game out of reach.  With 4:15 left in the third, Roethlisberger threw a 13yd touchdown pass to Diontae Johnson.  This was nice to see, considering Johnson had a few key drops early in the game, something he has delt with for much of his career.  At the 7:41 mark of the fourth, Roethlisberger connected with James Washington for a 15yd touchdown pass.  Washington would lead all receivers with 37yds, while Najee Harris led the rushing attack with just 29yds.

It has now been five years since Pittsburgh last won a playoff game and with a slew of offseason questions, that streak may extend into next year.  Who will be the quarterback when the 2022 season starts?  What changes will be made along the offensive line?  Will there be a clear number 1 wide receiver?  How will the team address depth issues along the interior part of the defense?  Who will be the new GM?  With so many questions lingering, this organization needs to get to work now on answering them.