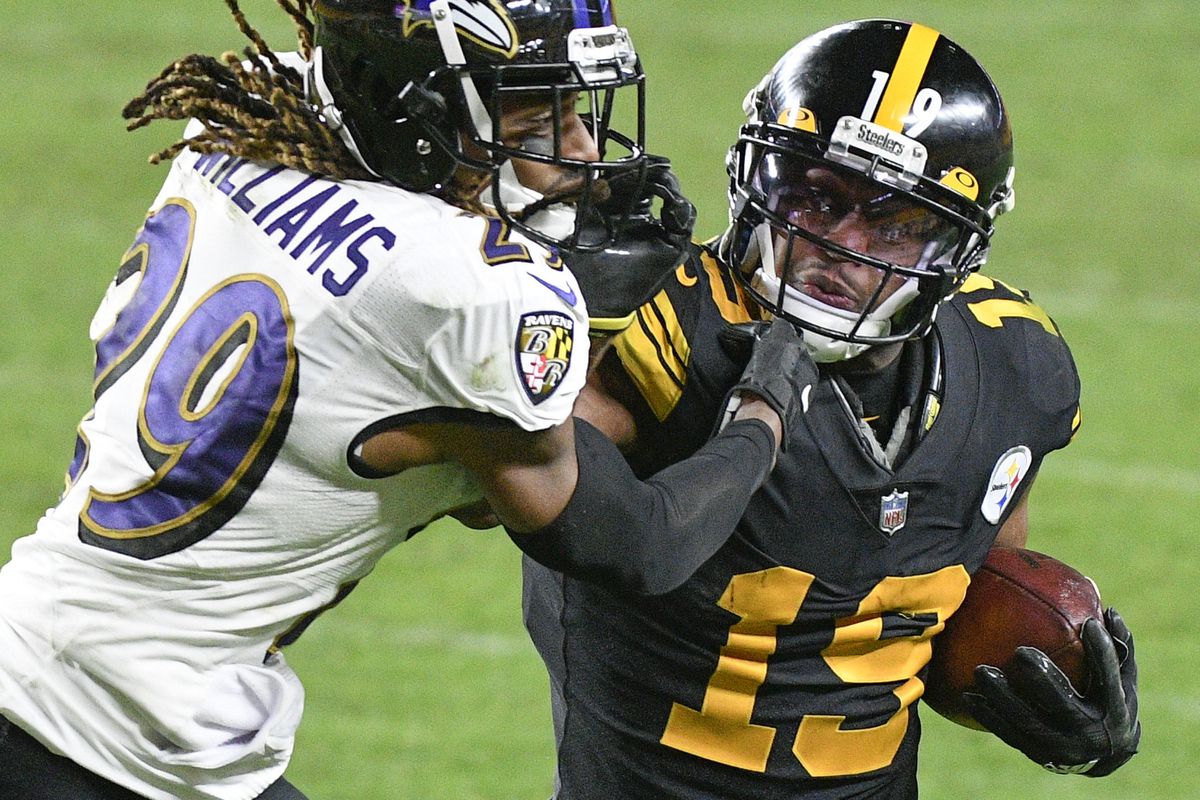 Happy Thanksgiving everyone!  At least that would have been the headline had the Pittsburgh Steelers and Baltimore Ravens played their game at Heinz Field on their originally scheduled date.  With Baltimore suffering a slew of COVID-19 cases the game was rescheduled three times and finally played at 3:40pm on a Wednesday afternoon.  That seemed strange, but it is 2020.  Neither team looked good as sloppy play ruled for most of the day.  In the end though, it was Pittsburgh who moved to 11-0 on the season with a 19-14 victory, thus eliminating the Ravens from possibly winning the AFC North.

The Steelers were able to jump on the board first after Joe Haden picked off a Robert Griffin III pass and returned it for a 14-yard touchdown.  Unfortunately, Chris Boswell missed the extra point, so the Pittsburgh lead was only six.  Baltimore would drive down the field and take their only lead of the game with 2:07 left in the quarter on a 1-yard touchdown run by Gus Edwards.

The second quarter was nothing but Steelers field goals as Boswell would kick a pair of 25- and 27-yard field goals to increase the lead to 12-7.  The Ravens almost took the lead at the end of the half, but Minkah Fitzpatrick knocked the ball out of the hands of Baltimore tight end Luke Wilson in the back of the endzone.

After a scoreless third quarter, Pittsburgh looked to put the game away early on in the fourth when Ben Roethlisberger threw a 1-yard touchdown pass to JuJu Smith-Schuster to go ahead by twelve with 13:20 remaining in the game.  The Ravens battled back though.  After switching quarterbacks, Trace McSorley threw a 70-yard touchdown pass, that was aided by a missed tackle from Terrell Edmunds, to Marquise Brown to cut the lead to five.  Thankfully the Steelers collected a couple first downs to run out the clock and close out the victory.

The biggest takeaway from this game is the possible torn ACL for Pittsburgh linebacker Bud Dupree.  If this rings true it will be the second linebacker to be out for the year with a torn ACL and be a very big hit to the Steelers tremendous pass rush.  This game was ugly and I am sure that much of it can be blamed on the chaos from the COVID-19 delays.  Roethlisberger only threw for 266 yards with one touchdown and one interception.  Benny Snell rushed for 60 yards on sixteen carries.  Eric Ebron led the way with seven receptions and 54 yards.

Pittsburgh was terrible in the red zone today and will need to improve that prior to their next game.  The focus must immediately switch to preparation to playing the Washington Football Team.  While their record may not be the best, they are currently battling to win the NFC East and have won their past two games.  This contest will be played on Monday December 7 at 5:00pm and will be broadcast of FOX.