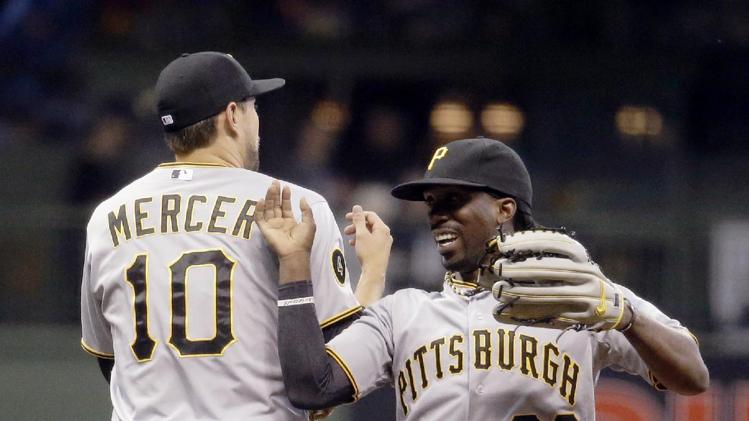 As we’ve seen way too often already this season, the Milwaukee Brewers have the Pittsburgh Pirates’ number.  Last night’s 5-2 loss was the latest defeat in a lopsided series that has been dominated by Milwaukee.  But unlike other seasons, the Pirates’ main problem this year against the Brewers has been lack of offense, not lack of pitching.

Tonight, the Pirates got some much needed offense from two unlikely players.  Chris Stewart hit an RBI single and Starling Marte hit a two-run double to lead the Pirates over the Brewers in the second of a three game series at Miller Park, 4-1.

Prior to today’s game, Stewart didn’t have an RBI this season, and Marte, who has been bothered by a sore back, wasn’t expected to make an appearance in the lineup.

Both starting pitchers, Francisco Liriano for Pittsburgh and Wily Peralta for Milwaukee, pitched very well, but neither earned a decision in the game.  Liriano gave up one run on four hits with on walk and seven strikeouts in six innings, while Peralta gave up one run on five hits with a walk and four strikeouts through seven innings.  Bryan Morris and Tony Watson each pitched a scoreless inning for the Bucs, setting the table for Mark Melancon, who earned his fifth save of the season.

The Pirates scored the first run of the game in the fourth inning.  Andrew McCutchen led off with a walk, advanced to third base on Pedro Alvarez’s single, and scored on a fielder’s choice groundball hit by Jose Tabata.

Pittsburgh took the lead back, and then some, in the top of the ninth inning off Brewers’ closer Francisco Rodriguez.  Davis got things started with a one-out single to right, advancing to second on Jordy Mercer’s single to shallow center.  Stewart then smacked a single to center field, scoring Clint Barmes, who pinch-ran for Davis, giving the Pirates a 2-1 lead.  Marte’s double to deep center scored Mercer and Stewart, giving the Bucs some much needed insurance.

This was a much needed win for the Pirates.  Divisional games are the most important to win, and, considering how many issues they’ve had against the Brewers, the Pirates really needed to win tonight.

The Bucs will look to take the series from the Brewers in tomorrow’s rubber match at Miller Park.  Wandy Rodriguez will be activated from the disabled list and pitch tomorrow against Milwaukee’s Yovani Gallardo.  First pitch is scheduled for 1:10pm.