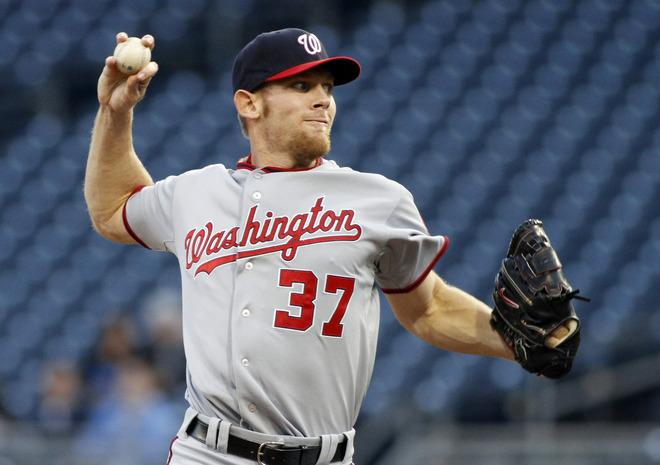 After winning the first pair of games against the Washington Nationals, the Pirates found themselves in rather unfamiliar territory:  they had an opportunity for a series-sweep.  A win tonight would put the Bucs within a game of the .500 mark, which could do mounds for the team’s confidence against one of the better pitching staffs in the National League.  If they were going to complete the sweep, they’d have to face one of the best in the game, Stephen Strasburg.  Unfortunately, in another hard-fought close game between these two teams, the Nationals outlasted the Pirates, 4-2 tonight at PNC Park.

In June 2010, Strasburg made his MLB debut against the Pirates, and was masterful.  Aside from a Delwyn Young two-run homerun, the Nationals’  ace was dominant, striking out 14 batters in front of a sellout crowd.  Almost two years (and a Tommy John surgery) later, he faced the Bucs again, and just like 2010, he had the strikeout working.  He tallied 13 K’s through six innings, including three punch-outs of Garrett Jones and two of Pedro Alvarez.

That being said, the Pirates did have opportunities against Strasburg; some they were able to cash in on, and others they weren’t.  Jose Tabata led off the fourth inning with a single on the first pitch he saw, and after advancing to second on Alex Presley’s sacrifice bunt, he scored on Andrew McCutchen’s RBI single.  Cutch advanced to second base on the mistake of Bryce Harper to throw home, and scored on Neil Walker’s two-out RBI single.

And while they were able to make the most of their chances earlier, the Bucs were nearly gift-wrapped a run by Strasburg and the Nationals in the sixth inning.  For the first time in his young career, Strasburg walked three straight batters (McCutchen, Alvarez, and Walker) to load the bases with two outs for Jones.  Unfortunately for Buccos’ fans, G.I. struck out, ending the threat and the inning.

Completely overlooked because of the Strasburg sighting tonight, Kevin Correia actually pitched pretty well in his seven innings of work.  In fact, he was tremendous all night, except for the sixth inning, which proved to be the difference in the game.  A solo homerun by Roger Bernadina and a two-run shot by Adam LaRoche put the Nationals in front 3-2.  Unfortunately for Correia, despite a strong outing overall, the minor hiccup in the sixth cost him a victory and the Pirates the game.  Rick Ankiel’s solo homerun off Chris Resop added an important insurance run for the Nats, giving them a 4-2 advantage, which was the eventual final.

So the Pirates failed to complete the sweep of the Nationals tonight.  Coming into this game tonight, everyone knew it would be a difficult task to beat Strasburg.  Despite a ton of strikeouts, the Pirates did have opportunities to win.  While it’s frustrating to lose tonight, the Bucs battled hard against one of the better teams (record-wise) in the National League.  It’s always extremely difficult to beat a team three games in a row, especially for the Pirates.  Still, a series-win over a good team will hopefully build some momentum for the upcoming weekend series.

The Pirates will conclude their home stand with a three-game series against the Houston Astros at PNC Park.  This will be the first time the Bucs & Stros face one another, and another opportunity forPittsburghto gain some ground in the N.L. Central.