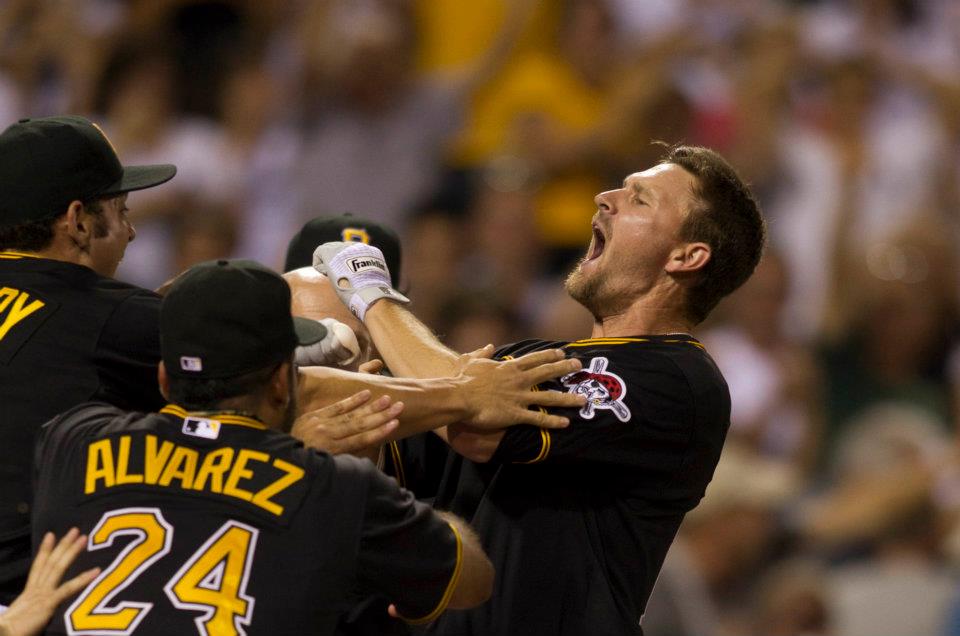 After a blowout win on Monday night, the Houston Astros had to be playing for pride on Tuesday.  Early on it looked like they would get their revenge with a rough outing by A.J. Burnett and a blown save by Joel Hanrahan, but the offense carried the load and in the bottom of the ninth Drew Sutton dropped a bomb to centerfield to give the Pittsburgh Pirates an 8-7 win.

Through the first 3 ½ innings, Houstonwas roughing up the Buccos.  A 4-0 lead is what they carried before Andrew McCutchen cut the lead to two with an opposite field homer.  The Astros regained those two runs in the sixth and chased Burnett from the game.  This was his first bad outing since early May inSt. Louis.  His final line of 5 innings pitched, six runs on twelve hits, with five K’s and two walks, is not what we have come to expect out of him, but every pitcher has a rough outing now and then.

With Burnett gone the Pittsburghoffense would spring to life.  Three runs would cross the plate in the bottom part of the sixth.  Casey McGehee would single home Garrett Jones.  Two batters later would see Pedro Alvarez hit a pinch hit two run double to get the Buccos back to within a run.

After the crowed stretched in the seventh G.I. Jones belted a two run home run to give Pittsburghtheir first lead of the night.  Jason Grilli closed out the eighth and that allowed Hanrahan to come out of the pen.  On this night however Hanrahan was not at his best.  He would issue a one out walk to Jed Lowrie and then with two outs give up an RBI double to Jason Castro, that tied the game at seven.

While the pitching staff has carried the team many nights this year, the newest Bucco Sutton was here to lend a hand tonight.  With one out he would send the crowd of 21,516 home happy with a solo shot to deep center that ended the ball game.

What can you say about this team, they just don’t give up at any point.  Blowout or walkoff, this team comes to play every night and makes it exciting for all fans.  The way the offense is producing this past month is exciting to watch, because it is not something we are use to seeing at PNCParkout of the home team.  The Pirates will look to take this series tomorrow afternoon at 1:35 with Kevin Correia on the bump.