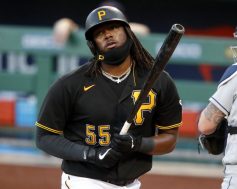 Cleveland took the lead in the top of the second inning on an RBI single by Beau Taylor, scoring Franm... 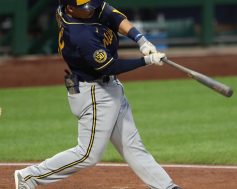 The Pittsburgh Pirates and Milwaukee Brewers finished off a three-game series Wednesday night, with each team notching a comeback victory during the first two games.  That would not be the case tonight as Milwaukee grabbed the lead in the third and held onto it behind a stellar pitching performance by Brandon Woodruff.

Woodruff tossed 6.1 innings tonight and during that time struck out ten, walked one, and allowed one hit.  The Pittsburgh offense never really threatened at any point, leaving only two men on base.  David Phelps entered the game and struck out the final two batters of the seventh.  The eighth belonged to Devin Williams and after a scoreless inning he handed the ball off to Josh Hader, who picked up his first save of the season.

Joe Musgrove started for the Pirates and wa... 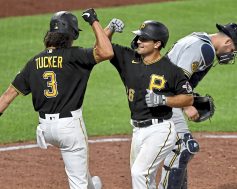 It certainly wasn’t the cleanest game, but the Pittsburgh Pirates battled back and forth with the Milwaukee Brewers on Tuesday night at PNC Park, coming away with an 8-6 victory.

For the second night in a row, the Bucs took a lead into the ninth…but this time, they held on to win the game.

Derek Holland made his debut for the Pirates on Tuesday, giving up two runs on two hits in 5.2 innings of work.  Unfortunately, the bullpen once again struggled, giving up four runs and temporarily surrendering the lead.

A two run single by Guillermo Heredia put the Bucs in front 2-0 in the fourth, but a two run homerun by Keston Hiura in the sixth tied the game.

A bases loaded walk to Manny Pina gave the Brewers the lead in the seventh, but they weren’t done there... 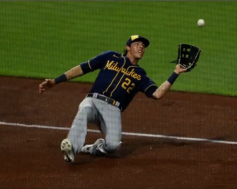 The Pittsburgh Pirates opened the home portion of their 2020 season tonight taking on the Milwaukee Brewers.  With no fans in attendance it was a rather quiet home opener, but at least baseball is back in the Burgh.  Pittsburgh lead for a large portion of this game, but a late blown lead and new extra inning rules helped Milwaukee to a 6-5 victory.

Steven Brault started for the Pirates tonight and worked two innings before a rain delay cut his night short.  He allowed one hit to go with one strikeout and two walks.  Brault was then piggybacked by Chad Kuhl.  Kuhl was pitching for the first time since 2018 and was sharp over 3.2 innings.   He left the game giving up three hits, striking out four, and walking two.

The Buccos got an early 1-0 lead in the second inning on a solo home ru... 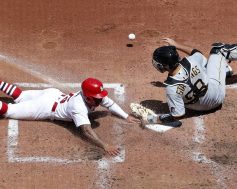 After a close loss on Friday and a blowout defeat on Saturday, the Pittsburgh Pirates took the field this afternoon at Busch Stadium looking to avoid a sweep against the St. Louis Cardinals.

Mitch Keller pitched a nice game on the mound, and the Bucs got some timely hitting in key situations as they salvaged a game in the weekend series, picking up a 5-1 victory.

Keller won his first start of the year, giving up one run on two hits in five innings.  His mound opponent, Daniel Hudson, gave up four runs on seven hits in a losing effort.

St. Louis scored the game’s first run in the bottom of the third, as Tommy Edman singled home Kolten Wong.  The Pirates answered immediately in the next inning, on a solo homerun by Colin Moran and a two run homerun by Jose Osuna.  A sacrifice fly by Jos... 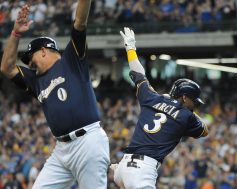 The Milwaukee Brewers completed a pivotal three game series sweep this afternoon at Miller Park, beating the Pittsburgh Pirates by a 4-3 score.

With the victory, the Brewers hold a commanding four game lead for the final Wild Card spot over the Chicago Cubs and are just three games back of the St. Louis Cardinals in the N.L. Central.

Meanwhile, the Pirates are 26 games under .500, have lost nine of their last ten games, and hold the second worst record in the National League.

Trevor Williams fell to 7-8 on the season, giving up two runs on three hits in five innings.  A solo homerun by Orlando Arcia in the second gave the Brewers a 1-0 lead, and a homerun by Eric Thames in the fourth and then a two run bomb in the sixth, his 22nd and 23rd of the season, made it 4-0.

The Pirates tried to r... 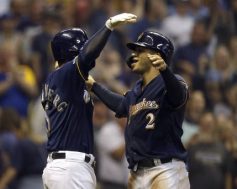 Pirates Blown Out Again By Brewers

The Pittsburgh Pirates and Milwaukee Brewers continued their three-game series Saturday night and once again it was a blowout victory for Milwaukee.  After trailing by a run early, the Brewers would go on to score ten straight over the next seven innings for a 10-1 win.  We would also see another bad outing from pitcher James Marvel, who was being touted as a possible member of the 2020 staff.

Pittsburgh’s lone run came in the first inning when Adam Frazier scored on a fielding error by Keston Hiura.  Hiura quickly made up for that mistake in the bottom half of the inning when he hit a two-run home run to left center field.  Milwaukee plated three more runs in the fourth inning.  Lorenzo Cain started things with an RBI single... 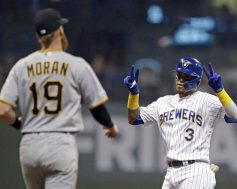 The landslide that has become the Pittsburgh Pirates 2019 season continued on Friday night with a 10-1 loss to the Milwaukee Brewers at Miller Park.

Steven Brault struggled on the mound, falling to 4-6 on the year after giving up six runs (four earned) on six hits and three walks in 5.1 innings of work.  Meanwhile, the Bucs couldn’t touch Milwaukee starter Chase Anderson, who pitched six innings of scoreless ball, giving up just three hits and one walk.

Bryan Reynolds had three hits for the Pirates, lifting his average to .321 for the season, eight points behind Christian Yelich for the National League lead.  The Pirates’ lone run came in the seventh inning a on solo homerun by Adam Frazier.

The Brewers scored three runs in the bottom of the first to take control of the game early... 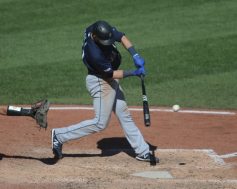 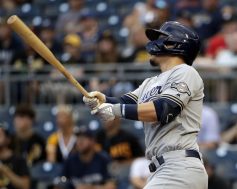 The Milwaukee Brewers have dominated the Pittsburgh Pirates this season, and that trend continued on Wednesday night, as they completed the series sweep of the Bucs with an 8-3 victory at PNC Park.

The Brewers are now 12-4 against the Pirates this season, as the Bucs’ post All Star break freefall continued with their eighth straight series loss.

Trevor Williams started for Pittsburgh, falling to 4-5 on the season after giving up six runs on eight hits in five innings of work.  Milwaukee used a total of five pitchers on the night, with Junior Guerra earning the win by pitching two scoreless innings.

The Brewers took control of the game immediately with two runs in the first inning on a two run homerun by Keston Hiura...