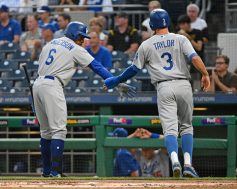 After a heartbreaking loss to the Los Angeles Dodgers last night at PNC Park, the Pittsburgh Pirates took the field tonight looking to even the score in the second game of this four game series on the North Shore.  Unfortunately, the Dodgers jumped out to an early lead, and their high powered offense eventually outlasted the Pirates for an 8-5 victory.

Jameson Taillon started for Pittsburgh and once again struggled mightily throughout his outing.  He lasted just five innings, giving up five runs on five hits and five walks with just one strikeout.  His ERA now sits at 4.85 on the season.  Meanwhile, his mound opponent, Brock Stewart, had a difficult evening as well – two innings, five runs on four hits with four walks.

The Dodgers took the lead on Taillon and the Pirates in the top of the first inning.  Justin Turner’s ground out scored Chris Taylor, who led off the game with a double.  Los Angeles held an early 1-0 advantage.

After the Pirates squandered an opportunity to score with two runs in the bottom of the first, the Dodgers jumped on Taillon again, loading the bases with one out for Stewart.  The Dodgers’ pitcher smacked a bloop single into shallow left, driving in the game’s second run.  A two-run single by Taylor made it 4-0, and it looked like it would be a long night for the Pirates.

Pittsburgh’s offense erupted in the bottom of the third inning.  After Taillon led off with an infield single, Starling Marte crushed a two run homerun to left field to make it a 4-2 game.  A walk to Adam Frazier followed, and then Andrew McCutchen singled, putting runners on first and third with no outs. A walk to Josh Bell loaded the bases, and the Bucs were in business.  Josh Harrison’s two run double off the wall tied the game, and John Jaso’s ground out scored a run to give the Pirates a 5-4 advantage.

An infield single by Taylor scored a run for L.A. in the fourth, and the game was tied 5-5.  A two out RBI single by Corey Seager in the sixth gave the Dodgers a 6-5 lead, and a two run homerun by Yasmani Grandal in the seventh increased the lead to 8-5.  The bullpen would shut down the Pirates handily in the latter innings to clinch the Dodgers second victory in as many nights.

The Pirates look overmatched in this series so far.  Yes, the Dodgers have the best record in all of baseball for a reason.  But the Bucs could have certainly played better so far this series.  Despite scoring a lot of runs, the Pirates offense has squandered opportunities to put more on the board, while the defense has made some blunders that have cost them.  Again, it speaks to the inconsistency of this team, which is why they sit where they do in the division standings.

The Pirates will look to get back on the winning track tomorrow evening at PNC Park.  First pitch is scheduled for 7:05pm.