The Saga Continues: Lack Of Offense Leads to Pirates’ Loss 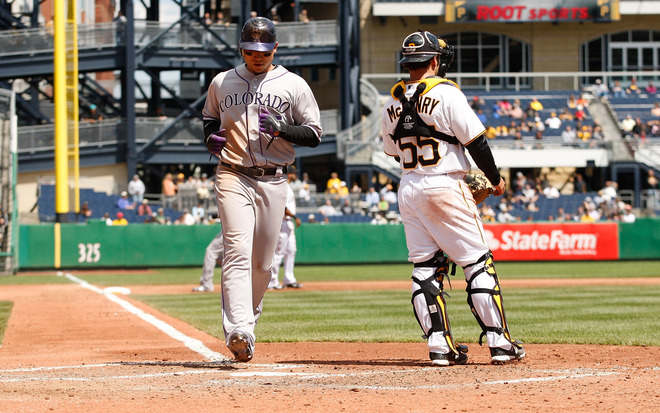 Most Pirates’ fans would assume that if James McDonald takes a no-hitter into the seventh inning and Pedro Alvarez hits a homerun in the same game, the Bucs are going to win that game.  Right?

Maybe not.  The Colorado Rockies stole one from J-Mac and the Pirates today at PNC Park, 2-1.

The Pirates dropped the first game of a doubleheader today to the Rockies, despite an incredible performance by starter James McDonald, who took a no-hitter into the seventh inning against Carlos Gonzalez, Troy Tulowitzki, and the Rockies.  J-Mac gave up just one run on one, while striking out eight and walking three in his seven innings of work.  And for all that, he earned another no-decision this afternoon.  He is 0-1 on the season thus far.

Even though he held Colorado hitless through the first six innings, it certainly wasn’t a cakewalk for McDonald.  He struggled with control throughout the afternoon, and nearly lost his no-hit bid in the fifth inning.  But he battled through it, made tough pitches, and..well…sure, he was a little lucky there too.  Still, he pitched well enough to be the winning starting pitcher.

That leads us back to the offense.  It seems as though it’s the same script game after game.  The Pirates just can’t score runs.  Hits weren’t the problem today – they had nine of them – they simply couldn’t capitalize in scoring situations.  They squandered good opportunities in the first, fifth, and seventh innings.  Pedro Alvarez did “lead the offense” with his solo homerun to deep center field in the seventh inning to tie the game, 1-1.

Chris Resop gave up the game winning sacrifice fly to Tyler Colvin in the eighth inning, after hitting Eric Young with a pitch and surrendering a single to Marco Scutaro.  Resop fell to 0-2 on the season.

Not a single Pirate had a multi-hit game, but every starter did have at least one hit.  Normally, the offense’s problem is that they can’t get on base.  Today, they were able to get on base…they just couldn’t string any hits together to push runs across the plate.  Frustration is the optimal word here…but it’s a rather large understatement at this point.

Andrew McCutchen’s double in the first inning, along with Pedro’s HR in the seventh, were the Pirates’ only two extra-base hits of the day.

Game two of the doubleheader today will also be the rubber match between these two teams.  The Bucs will look to finish at .500 on the homestand with a victory before heading back out on the road against the Atlanta Braves on Friday.