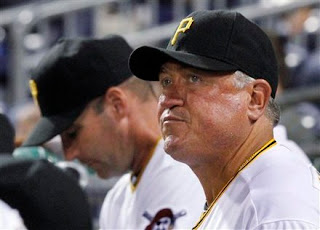 The Pirates enter tonight’s game against the Cincinnati Reds five games over the .500 mark and a half game back in the N.L. Central standings.  Back in April, those of us who follow the Buccos closely could only dream about the first three months of the season going the way they have thus far.  Still, the Pirates are at the point of the season where they must prove to the critics, the other teams in MLB, the fans, and most importantly, themselves that they belong in this N.L. Central race.  The true test begins tonight.
The Pirates have arguably their toughest stretch of the 2011 season ahead of them in the next couple weeks.  Their home-stand, which kicks off tonight, includes a three game set against the Reds, one of the more underachieving teams in Major League Baseball to this point in the year.  Unable to find any type of consistency between their pitching and offense on a regular basis, the Reds find themselves one game under .500 and 3.5 games back in the division.  Still, with the likes of Joey Votto, Brandon Phillips, and Jay Bruce in the lineup, this team is more than capable of putting some big numbers up on the scoreboard.
Do we even need to talk about how important the series this weekend against the St. Louis Cardinals is to the Pirates?  The two clubs are tied in the standings right now, just a half game back of the Brewers (ugh).  The Red Birds will travel to for a three-game series with the Mets.  Depending on how that series goes, and considering the fact that the Mets are about as inconsistent as fair-weather Pirates’ fans, the upcoming weekend series could be a battle for first place in the division.  It’s still strange to think that way about our Buccos…especially in July.
You think the home-stand is tough?  Next week’s road trip is even worse.  Following a brutal four-game set in against the wild-card leading Braves, will travel to for a three-game series against their cross-state rivals.  Considering the fact that the Pirates took two of three from the Phillies earlier in the season at , they will certainly be out for revenge.
And there it is, the next 13 games for the Pirates will be the toughest stretch of the 2011 season, at least to this point.  Ronny Cedeno and Steve Pearce are expected to possibly be ready for the Cardinals’ series this weekend, which will hopefully provide more offense that the Pirates certainly need.  The Buccos are going to face some outstanding pitching over the next couple weeks, which means they are going to need to match those performances on the mound.  Kevin Correia and Charlie Morton need to pitch better than they have the past few starts, and Jeff Karstens needs to continue his outstanding season.  Neil Walker needs to continue to hit well, and Andrew McCutchen needs to return to where he was before the All-Star break.  needs to become the doubles-machine he was a few years ago, and Alex Presley needs to continue to play out of his mind on both sides of the ball.
Does this all sound like it’s a lot to ask of this team, a club who wasn’t expected to even be in contention by the end of May?  Well maybe it is…but if they want to be considered in the race for the division along with teams like the Cardinals and Brewers, they need to prove themselves to the rest Major League Baseball over the next two weeks.
Tonight is the first step in a series of 13 in which the Pirates can solidify themselves as a legitimate National League contender.  If they conclude the next two weeks of baseball within reach of the division lead, they’ll be setting up a VERY interesting last two months of the season, one they’ll be playing with the entire city of in their corner.
And…
As Always…
Let’s Go Bucs!